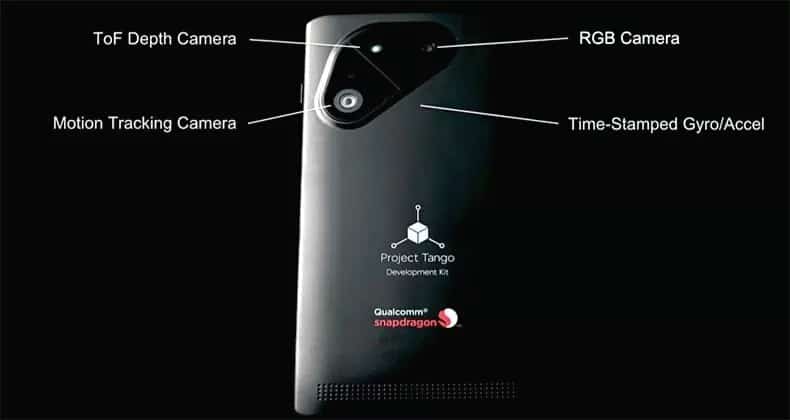 Google’s Project Tango is a seemingly esoteric idea of squeezing a number of sophisticated cameras into a device, combining this with some clever software, a powerful processor and a developer-only sticker. The Tango tablet is based around the Nvidia Tegra K1 32-bit  processor, 4 GB of RAM, 128 GB of local storage and a 1920 x 1200 resolution, 7.0-inch display. The tablet has three cameras – a wide angle front facing unit, a rear mounted infrared camera complete with infrared projector, and a very wide angle motion tracking camera. It’s kept alive by a high capacity, dual cell battery, because the Tegra K1 benefits from 192 GPU cores and these are used by the Tango software in order to model and map rooms. This requires a lot of processing power and RAM, which is why the Tango tablet contains such high-performance hardware. Now, we had also seen a Tango compatible smartphone, but there were very few of these released into the wild and it seemed that the Tango project would culminate in the tablet, which was originally over $1,000 but had seen the price halved.

However, at the Google I/O 2015 developer show today, Google announced that it has been working in partnership with North American mobile processor manufacturer, Qualcomm, in order to incorporate the Project Tango environment-sensing camera technology into the Qualcomm reference ‘phone designs. For the time being, the resulting smartphone reference models will remain in the hands of seeded developers and device manufacturers and they may never be officially released, but the signs are that Google is still pushing ahead with the Project Tango technology and by involving another System-on-Chip manufacturer, it is also potentially opening up the market. You see, once the Project Tango technology is consolidated into a reference design, it is but a small jump to start incorporating the technology into production models.

We have seen Google announce tie-ups with other manufacturers: at a previous event, Google told the world that it was working with LG in order to bring Project Tango technology to consumers in early 2015. It looks like that ship has sailed and for whatever reason, the tie up with LG never made it off the ground. So what’s changed? Well… one thing to consider is how seemingly in the space of a year, virtual reality technology has once again become big news. Very high-resolution screens and powerful chipsets to drive the displays means that a smartphone mounted a few inches from your eyes is a capable VR device. Project Tango’s room sensing technology could be used to capture content that could be used for virtual reality projects very easily. We could be on the cusp of something very exciting indeed.