It is no secret that mobile devices have been slowly supplanting all other forms of personal computing since they entered the market in 2008; according to Enders Analysis the global install base of smartphones and tablets surpassed the number of PCs at the end of 2013. This paradigm shift away from traditional forms of computing has disrupted industries and businesses that have traditionally relied on desktop and laptop users for income. A perfect example is software development, as another noteworthy statistic from Enders Analysis indicates consumers spend more time accessing the internet from mobile apps than they do on PCs. A recent announcement from Google executive Jerry Dischler conforms to this trend. According to Dischler Google searches on mobile devices now outnumber those performed on PCs in 10 countries across the globe, including the US and Japan. While this may seem like good news for Google it does not bode well for its advertising business, which it still makes up the bulk of its revenue.

Unfortunately for Google, they have not found a way to generate the same amount of revenue from mobile advertising as they do from PCs. In its most recent financial results Google revealed that paid clicks increased 13% compared to Q1 in 2014, however, their cost-per-click (how much it charges advertisers per click) declined 13%, which is entirely attributable to mobile. Considering the rate of paid clicks increase has also declined for the 5th consecutive quarter Google needs to revamp its mobile advertising business to remain financially successful over the long run. To this tune, they announced they would start boosting sites effectively designed for mobile devices in their search results to better capitalize on the shift towards mobile internet access.

We are now seeing Google’s efforts materialize as they just redesigned their mobile advertising platform such that simple links to products at the top of search results will be no more. The new ads (see below) are designed for touch and swipe based interfaces rather than point and click PCs. These mobile-friendly ads are geared to present users with much more data, such as images, product specs, and prices in a card-style interface similar to the cards utilized in Google new. These cards look much more appealing than your typical PC advertisement and blend in with Google’s Material Design such that the user experience is seamless; we are always going to have advertisements, they might as well look great and avoid disrupting our user interface. The interface also works like a carousel (another common feature of Android interfaces), giving users the ability to swipe across the cards to see more listings or similar products. Rather than immediately redirecting users to an advertisers website, selecting a listing expands the card and provides more detailed information about the product, which is much more convenient for users as they no longer have to leave the search results page to hunt down information. The new ads should start showing up in the coming weeks.

This latest bit of news from Google leaves a bitter-sweet taste in the mouth. Most people would rather not be exposed to advertisements. However, advertising is Google’s money-making machine; without it, there would be no Google. As such advertisements are here to stay, at least Google is making the experience better for users. Although they certainly are not making these improvements out of the goodness of their heart, it is definitely about improving their bottom line, both users and Google can simultaneously benefit from the new platform; it’s what you would call a win-win situation. As Android users I am sure we all want Google to be financially successful so that they can continue to innovate and bring us better software and services. Let’s hope their latest efforts pan out. 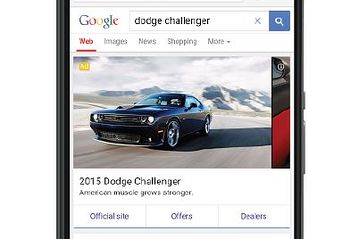