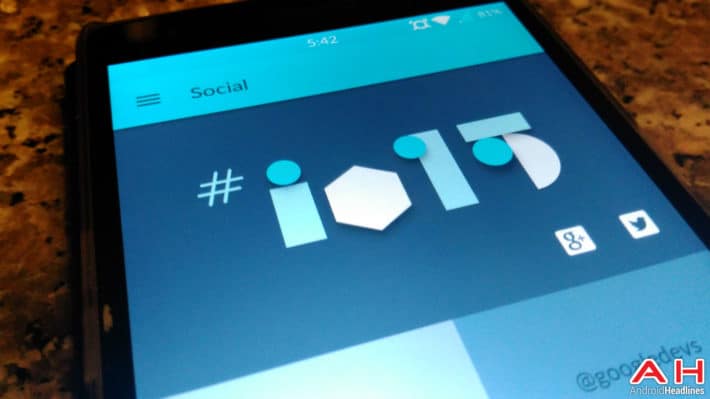 It has been a typically busy day today in terms of Google announcements. They have been coming through all day with updates to the likes of Fit, Gmail, Docs and Slides. However, this month, in general, has been one of Google news. This is, of course, more than understandable due to the upcoming Google I/O event which is set to take place at the end of this month. In preparation of the event, Google made available the schedule for everything that will be taking place over the two-day event last week. However, yesterday, it seemed the Google I/O 2015 app had suddenly become available to download.

The sudden availability though, did not come through the typical means of the Play Store. Instead, the app became available thanks to the APK being captured by those who were still part of a beta app channel from the previous year's event. Those users were seeing an update to their 2014 app, which effectively replaced last year's app with this year's one. As such, it was presumed the official roll out of the 2015 app would be coming soon enough. Well, it is probably not too surprising that it is a Google Wednesday when the app has finally landed.

The official Google I/O 2015 app is now available on the Play Store. Therefore, if you were on of those who opted not to sideload the app yesterday, but did want to get your hands on the app as soon as possible, then now is the time. In yesterday's sideloading announcement, it was already noted the features and content that is on offer with the app. However, to briefly recap, the app offers a more comprehensive view of everything that will be happening during I/O. This includes the option to view the schedule, watch some videos and even sync your data should be planning on attending. Not to mention, the app has seen a significant injection of Material Design compared to last year's offering. Either way, whether attending in person or remotely, if you are interested in downloading the app or to see everything the app has to offer, head over to the Play Store listing.