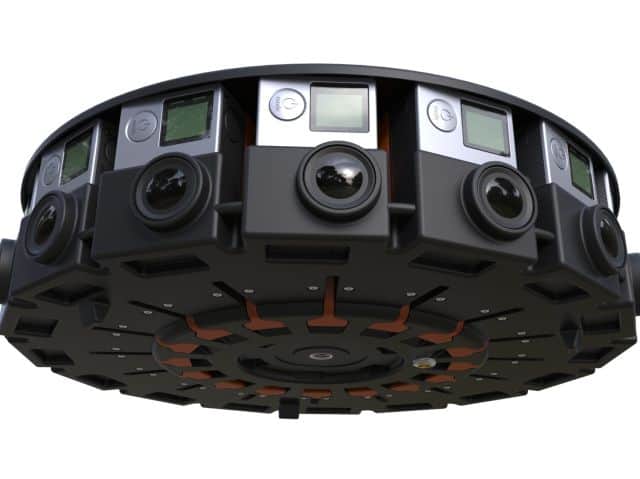 Google has today announced a new virtual reality platform called Jump, which is designed to take the technology mainstream. Google has also released the first Jump product, a GoPro camera called Array that captures 360-degree footage. The unit consists of sixteen cameras arranged into the one unit and combining their video feed into one file using Google's rendering technology. Google's Jump platform goes one stage further by allowing the 3D captured video feed to appear on YouTube. The Jump technology can work with an array made out of any material, including cardboard. The technology performs color calibration and exposure compensation to make sure that pictures from up to sixteen cameras come together without any awkward divisions. Jump uses algorithms about the underlying structure of the scene in order to perform three dimensional alignments and can compensate for different depths of perspective. Essentially, Google have given the Jump system an understanding of the scene. The Jump assembler will be available later in the summer (indicative reports show in July).

So far, so good: we have seen software companies attempt to take a fringe idea and push it mainstream. Google's track record in this respect is chequered but better than most companies, even if I need to throw in a reference to "Google Glass" to point out a product that is not yet mainstream (arguably, Glass is not designed as a mainstream product). However, in the case of virtual reality, the idea behind portable consumer-grade virtual reality technology has been around for several decades now but it has not yet pushed into the mainstream arena. Google's take on this is a little different thanks in part to the low prices that it intends to sell the technology at. You see, Google's Jump virtual reality videos made using the Array hardware will be made available on Google Cardboard. This is the company's low cost virtual reality headset announced at Google I/O 2014 and built out of… cardboard. The idea here is to keep the cost closer to $20 rather than the several hundreds of dollars that competitor devices sold by Facebook, Sony and HTC command. Google is betting that many people will be happy to try a $20 virtual reality headset rather than a $300, $500 or $800 piece of hardware. Cardboard has been something of a success, having sold a million units since it was demonstrated at Google I/O 2014.