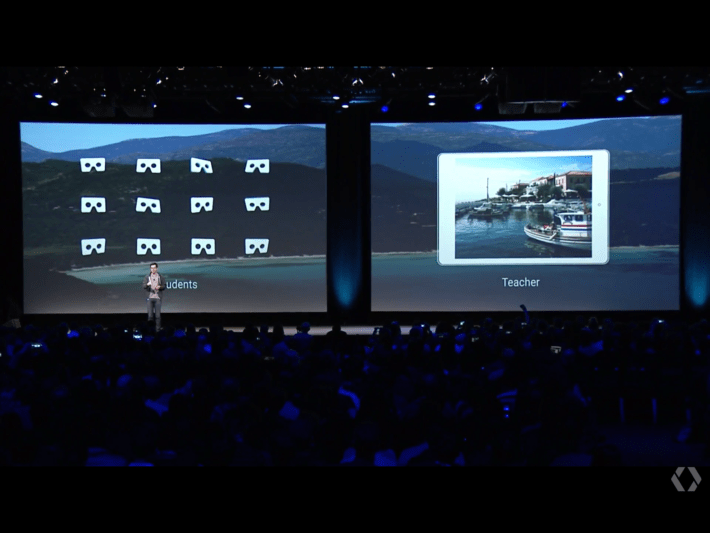 It's already been an action packed Google I/O so far today, and while added polish and the future seem to be big themes today, we haven't been short of big news, like free Google Photos. We had heard whispers that Google was looking to build on last year's Google Cardboard and virtual reality themes and Google sure did just that. If you're looking for all the news from I/O '15 you can take a look at all our coverage here.

Starting with Cardboard itself, Google announced a new version that will support phones up to 6-inches in size as well as a new button that works with every phone as well as construction that takes just three steps, rather than last year's twelve. Perhaps the most impressive announcement surrounding Google Cardboard and VR is that Google is bringing it to the classroom. On stage, they showed us footage of Expeditions in action, enabling children all over the world to visit places like the Great Wall of China from London, go deep underwater from the heart of Chicago and more. Expeditions delivers a box packed with Cardboard headsets (complete with Android smartphones) as well as a "Teacher Tablet" that controls all of the devices connected throughout the class. This allows classes of school children to effectively teleport anywhere on the Earth and experience places and environments like they never could before. This all adds to the learning experience, making information easier to understand after having almost first-hand experience.

This isn't the first time that Google have tried to introduce new technologies to the education sector, and while Virtual Reality might be a novelty for gamers and tech enthusiasts, Google is trying very hard to make it a reality for everyone in the future. Partnering with GoPro, Google will be offering what they call "Jump" rigs to enable anyone the ability to capture VR content, and will be using YouTube to make it available to anyone with a compatible Cardboard headset. Right now, Expeditions has been just a test, but Google will be improving and working on rolling out virtual reality to Android users all over the world. Those in attendance at I/O have been given a new version of cardboard for free, and it'll be available for purchase online soon, too.