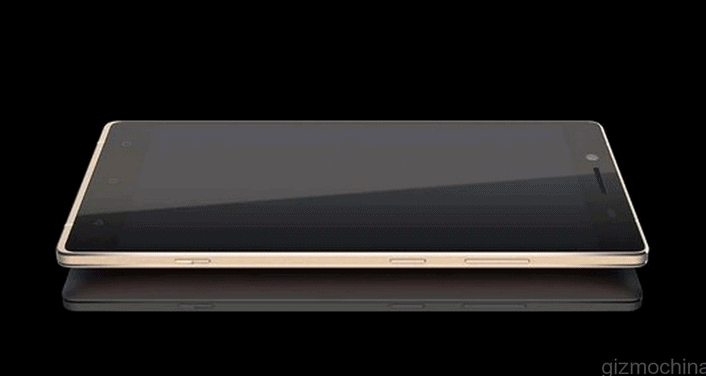 Gionee has unveiled their Elife S7 handset during the Mobile World Congress (MWC) in Barcelona. This handset has launched in India quite recently, and the company has started teasing yet another device a while back. Gionee's Elife E8 handset has been mentioned quite frequently in the last couple of weeks. This smartphone has even got certified by TENAA (China's equivalent to the FCC) earlier this month, so now we even know its specifications. That being said, we have some new info to share with you regarding this device, read on.

We did see the Elife E8 in TENAA's render, and now the handset appears yet again. If you take a look at the provided image, you'll see a nice and clean render of Gionee's upcoming device. The metal frame is clearly visible, as are the physical buttons on the right side. The volume rocker is located above the power / lock button, and below them you'll find a physical camera shutter button, which is a rarity these days. According to the previous info, the E8's 23-megapixel rear-facing camera will be able to stitch images together in order to provide a 100-megapixel photo.

According to TENAA, this handset will feature a 4.6-inch QHD (2560 x 1440) AMOLED display along with 3GB of RAM and 32GB of expandable internal storage (expandable up to 128GB via microSD card). This thing will be powered by an octa-core SoC clocked at 2.0, though we still don't know who will manufacture that processor. The 23-megapixel camera will be located on the back of this device, and an 8-megapixel CMOS snapper will be available up front. The 3,520mAh battery is also a part of this package, and the phone will support TD-SCDMA, TD-LTE and LTE-FDD 4G networks according to TENAA. The Elife E8 will ship with Android 5.0 Lollipop pre-installed with the company's Amigo OS installed on top of it. This handset will measure 164 x 82.3 x 9.6mm and weight 207 grams.

We're still not sure when will this handset hit the market, but Gionee did say a while back that we can expect it to be announced in July. Either way, stay tuned, we'll report back soon.