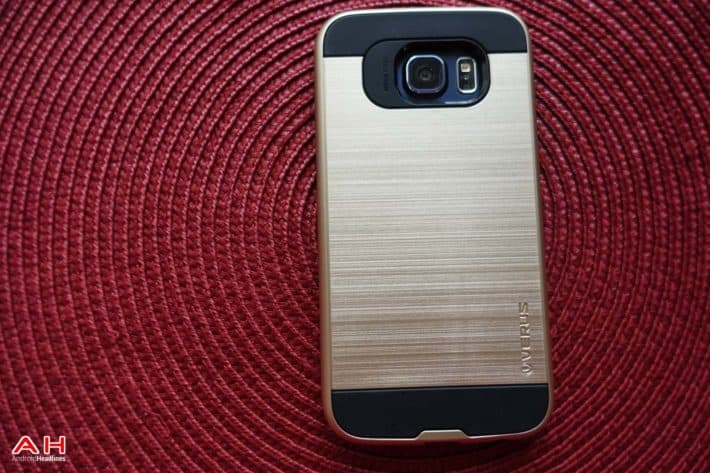 The Verus Verge case is pretty thin but still provides some adequate protection for your Galaxy S6. There are two layers to this case. We have the soft-touch case that goes against your device. This is mostly to keep your device from getting scratched up by the case. That glass scratches easily, as you probably already know. Then there's a hard case that goes on over that. The hard case is the one that's available in gold, military green and dark silver.

We have cut outs for the camera and flash module on the back. As well as cut outs on the bottom for the microUSB port, speaker and 3.5mm headphone jack. Up at the top you'll see cut outs for the IR Blaster as well as the microphone port. There aren't any cut outs for the volume rocker and power buttons. But they are textured and easy enough to find and press when needed. There is a slight lip on the front over the display. But it's not entirely thick. So it'll likely protect your device, but not provide full protection, unfortunately.

The Verus Verge case is available now from Verus via Amazon. All three colors are currently selling for $16.99. They are also available for the Samsung Galaxy S6 Edge, if you'd like to pick one up and live on the edge. It's a great looking and feeling case, in all honesty, this is the first gold case that I've actually liked enough to use everyday. Even after I'm done reviewing it. Which says quite a bit, in my opinion.