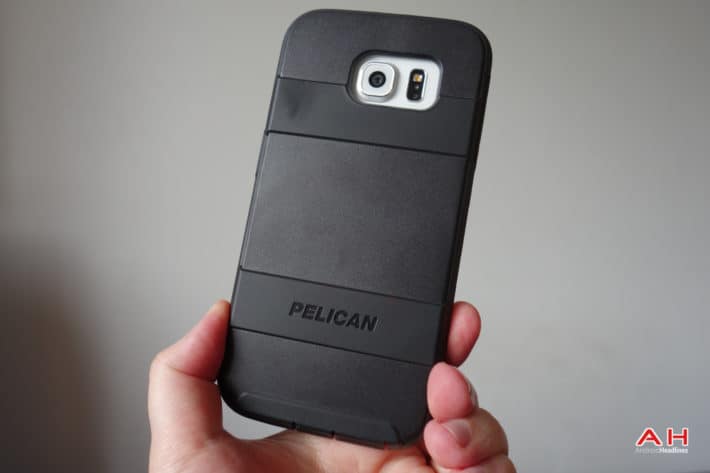 The common conundrum for many users today when it comes to smartphones, is throwing a case on it to protect it from drops and other everyday damage. This can be especially true with something like the Galaxy S6 which has a very sleek design with premium glass and metal construction. After all, you paid quite a bit of money to pick up that brand new smartphone which looks great. It's easy to understand then why some people don't want to take away from that beautiful style. If your main concern however is making sure your smartphone can continue to look good no matter what gets thrown at it, look no further than the Pelican ProGear Voyager case.

The main draw here is that the Voyager is capable of taking a beating. It's listed as meeting military specifications and while I didn't exactly try to test the limits, it was able to sustain a few good drops without any physical damage to the device itself. The case comes complete with four layer protection which includes the back layer of the case and the non-slip grip which fits around the front of the device, an anti-scratch screen protector, and a holster. The holster belt clips pivots so you can wear it on your hip or clip it to a bag or pocket in either a vertical or horizontal stance. The belt clip also acts as a kickstand for the phone which can be great for watching videos or using your device as a desk clock.

If you work a particular dirty job, like say, construction, the Voyager can help protect the Galaxy S6 from dust thanks to the port closures at the bottom, and they open relatively easily for charging with the case on. The case did bulk up the phone a little more than something like the Verus Iron Bumper, but that's to be expected with something that is meant to be tough. None of the signals seemed to be affected while the case was on, and surprisingly, both the volume rocker buttons and the power button were much easier to press than on the Iron Bumper case. If you want a slim case which complements the sleek design of the Galaxy S6, the Voyager is not for you, but if you want something to withstand plenty of damage, consider the Voyager from Pelican ProGear. You can grab it on Amazon for about $49.99 right now, and it comes with a lifetime guarantee from Pelican so if it ever gets broken, Pelican will replace it for free forever.