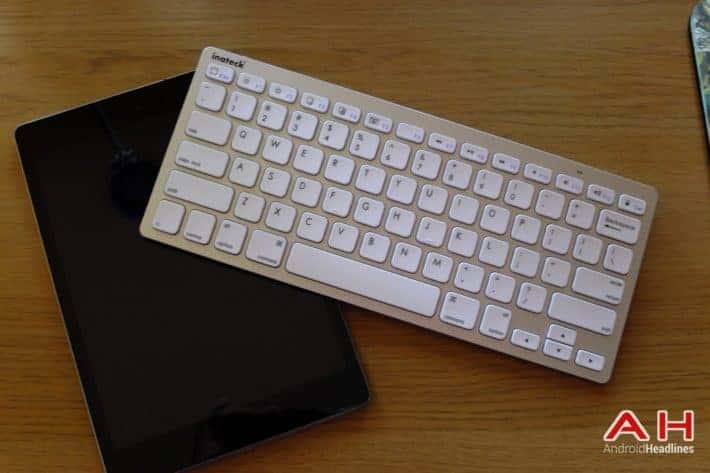 A Bluetooth keyboard can be an invaluable accessory for those on the move, or those just looking to use something other than a laptop to get work done. Assuming that the majority of what you need to get done on the road is a lot of typing, then throwing a Bluetooth keyboard in your bag is often a good idea, and can be a big help when traveling with an Android tablet.

We've reviewed Bluetooth keyboards from Inateck in the past, and some that we've been very impressed with. The BK1002 is a fairly inexpensive option that, yes, looks awfully lot like an Apple Wireless Keyboard. While that won't appeal to a lot of Android users, those that use a Mac (you can use Mac and like Android too, you know) at home or at work will appreciate the ability to use this with a Mac and their Android tablet. Before we go too far into the whole Android side of things, is this a decent keyboard?

Well, that's something that ultimately comes down to how much money you're willing to spend on a keyboard, really. The BK1002 is about $17 which makes this one of the cheaper keyboards out there. Taking into consideration its cost, the BK1002 is a decent machine, but if you were looking for something more substantially and altogether less plasticky, then the BK1003E is a much better bet, and is one of my favorite Bluetooth keyboards available. Unlike the BK1003, this doesn't have the gentle slope of the more expensive model, and is instead just a plastic slant of a keyboard. It takes AAA batteries and doesn't feature a rechargeable battery.

There's quite a bit of flex while typing, particularly across the center of the keyboard, but if you're okay with somewhat shallow keys, this is one of the nicer, more affordable options I've tried. The function key is the biggest annoyance for me, but it's not too much a pain once you figure out that the furthest right key is no longer the control key. All the buttons you could want on the move are indeed here, and all-in-all it's a pretty nice keyboard, especially at this sort of price point. The font, while a small design choice is oddly calming here and softens the blow of the cheap plastic that this is made up of.

The majority of the keys work with Android devices, however, I was unable to get this to work with my Nexus 9, but it worked just fine with my Xperia Z2, for whatever reason. The media keys work just fine, as does the lock key. I could not however, get the copy and paste functions to work. This wasn't a problem though, and the keyboard worked great as, you know, a keyboard.

It's inexpensive, works well and offers Mac users a keyboard that can be used with everything they own. It's not the most illustrious of keyboards, but it's a fairly pleasant experience and for the price it offers quite a bit.