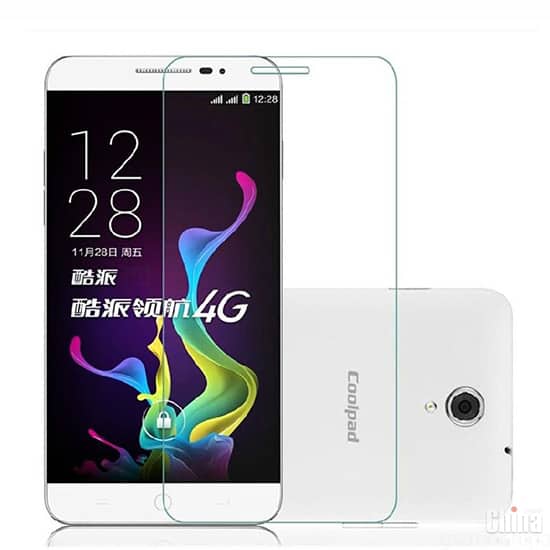 It seems like bezel-less devices are the latest obsession of smartphone OEMs. We've seen a lot of different variations of the device which sport very thin bezels on the sides, but neither of them was truly bezel-less, though it depends what you consider to be bezel-less, of course. The Sharp Aquos Crystal, Letv's recently released devices, Huawei P8, the unreleased Oppo R7 and Nubia Z9… all of these devices were called bezel-less at some point and sport very little bezel on the sides. The Oppo R7 and Nubia Z9 will launch this month, and it seems like one of Coolpad's offerings will join the 'bezel-less' party soon.

Coolpad's upcoming Tiptop 2 smartphone leaked, and according to the provided image above, this phone will sport very minimal bezel on the sides. Unfortunately for us, the phone's wallpaper is black, so we can't see if the black bars are present on the sides or not, the frame is extremely thin though. Anyhow, this is the second-gen Tiptop smartphone and according to the source, this handset will feature a 5.5-inch 960 x 540 display. The phone will quite probably be powered by Qualcomm's Snapdragon 410 64-bit quad-core SoC and will feature 1GB of RAM and 8GB of expandable internal storage (expandable up to 32GB). It will reportedly sport an 8-megapixel rear-facing camera, and a 2-megapixel front-facing shooter. The non-removable 2,500mAh battery was also mentioned. This device will offer dual SIM and 4G LTE connectivity as well, and you can expect it to ship with Android 4.4 KitKat pre-installed with Coolpad's skin on top of Google's OS. This handset will measure 153 x 77.5 x 5.5mm and weight 158 grams.

According to the source, the device will be available in White and Gold color options, and as far as build materials go, Coolpad opted for polycarbonate (plastic). There you have it, this phone will sport low-mid range specs, though it seems more of a low-end device based on the provided spec sheet. The phone doesn't look like that though, it looks far more premium, at least in the provided render. Coolpad seems to want up its game in the low-mid range space and offer something well designed and yet really affordable as well.