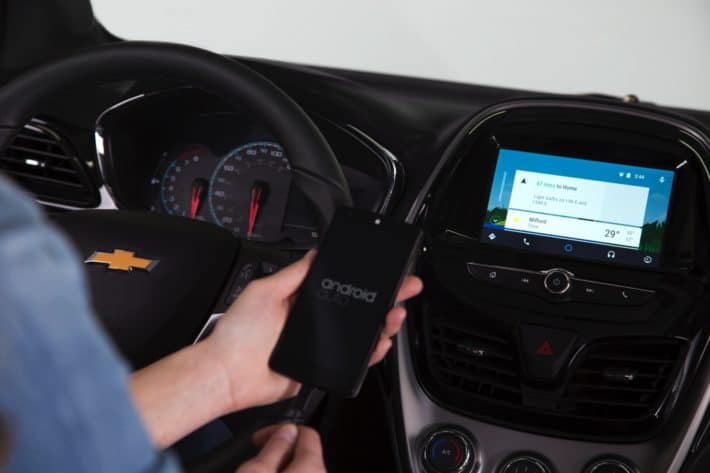 Today, Chevy is announcing that they are the second car maker behind Hyundai to offer Android Auto in their cars. That means it's built into the infotainment system that Chevy offers, and you don't need to get a head unit from the likes of Pioneer, JVC Kenwood and others. Chevy is claiming they are the "global leader" for Android Auto and offering it in all 14 of their 2016 models. That includes the 2016 Chevy Cruze which is making its debut on June 24th – just a few short weeks away.

"For most of us, our smartphones are essential," said Mary Barra, CEO of General Motors. "Partnering with Apple and Google to offer CarPlay and Android Auto compatibility across the widest range of models in the industry is a great example of how Chevrolet continues to democratize technology that's important to our customers."

Chevrolet says that their 7-inch MyLink system will give owners the choice of using Apple's CarPlay or Android Auto. While their 8-inch version of MyLink will be compatible with just Apple CarPlay beginning with the 2016 model year. Since development and testing is not yet complete, Android Auto compatibility on the 8-inch MyLink may come later on in the 2016 model year. So be on the lookout for that.

It's great to see Hyundai and Chevrolet both rolling out Android Auto just before Google I/O, where we will likely see more about the system. In case you forgot, the keynote starts bright and early tomorrow at 9:30am PDT, so make sure you stay tuned for that! Android Auto is the king in infotainment, at least it should be. I've used a few other infotainment systems, and they are just super clunky and not intuitive at all. With Android Auto and even Apple CarPlay to an extent, you're basically just using your phone, but on a bigger display. Google has done a great job of keeping the same experience on Android Auto no matter what car you buy.

Now that's two car makers, out of the many that have signed on with Google's Open Automotive Alliance that is pushing out Android Auto. Honda, and Audi also have plans as well as Dodge, Ford, Mazda and many others. And we can't wait to see more Android Auto enabled cars on the road soon.