Live streaming is all the rage amongst social media mavens. While live streaming has been possible for quite some time via Google Hangouts it didn’t catch on as a trend until very recently. The impetus behind live streaming’s recent rise in popularity was the launch of Meerkat at South by Southwest in early March, and later Periscope, which launched for iOS on March 26. Meerkat was initially exclusive to iOS but made its way over to the Google Plat Store on May 1, beating its rival Periscope to the largest platform in the world.

Since its release on the Play Store Meerkat has been in beta: until now. As of May 14th an update to the app removed its beta status, indicating the app has quashed most of its bugs and is officially stable. This is great news for fans of the app as it has admittedly had a rough start since moving over to Android. The review section is full of users reporting bugs and the app has garnered a 2.8 out of 5 star rating. We are still in the early stages of its first stable release so it may take some time for users to re-review and re-rate the app, don’t simply pass it up because it received bad reviews while it was still in beta; we will see how it fares in a few weeks.

Don’t know what Meerkatting is? This is how the platform works. Meerkat links to a user’s Twitter account and gives them the ability to stream their experiences to their followers. Once a user hits “Stream” their live video shows up in their follower’s Twitter feeds; if a user has the Meerkat app they will also receive a push notification when someone they follow starts streaming. Followers watching a stream can interact with the streamer by commenting, adding a favorite, or by retweeting the stream. Viewers be warned: everything that happens on Meerkat also happens on Twitter, don’t make a comment you wouldn’t want broadcasted to the Twitterverse. There is also no way to watch reruns of Meerkat streams; however, users can save their own streams to their phone if desired.

In general live streaming, whether it be through Meerkat of Periscope, is pretty interesting; it is highly interactive, an immediate and random way to reach out to people in your Twitter bubble, and complete strangers as well. It is also very real; seeing people you may look up to doing normal things, like going to the laundromat or grabbing lunch, and simultaneously being able to interact with them is a novel and oddly satisfying experience. It truly is like no other form of social media and offers a much more intimate experience than other platforms.

The stable release of Meerkat seems to be relatively bug free. Opening the app brings you to a homepage (see image below) with options to schedule or start a stream at the top, followed by active streamers underneath. There is also a button in the top right hand corner to search for users and another which takes you to a “Leaderboard” displaying top streamers. In my short time with the app I had no issues watching and interacting with a stream and the interface for commenting and seeing others’ comments was designed well. Admittedly, I have not tried streaming myself so I cannot comment on how well it works. Overall the stable release of Meerkat is solid: no glaring bugs, a simple interface, enough features to keep it interesting, and a nice Material inspired design that suits Android. Until now I have had no desire to get into live streaming; however, after experiencing it in the name of this article I plan on keeping the app and checking it out again in the future. Meerkat was able to convert me to live streaming. Who knows? Maybe it will convert you too. 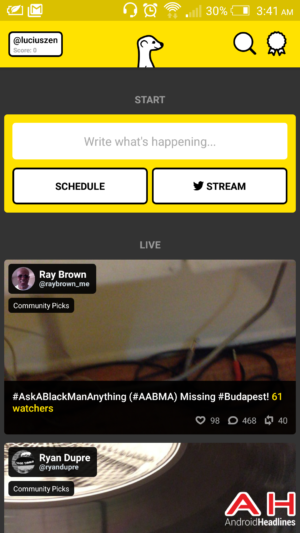