Android has been everywhere for quite some time. But at Google I/O 2014, Google brought Android to your wrist, TV and car. With Android Wear, Android TV and Android Auto, respectively. Now that we are on the cusp of Google I/O 2015, we're excited to see what Google has in store for Android. But first thing's first. Let's play with Android Auto.

We recently got a Pioneer AVH-4100NEX head unit, and have been using it for about a week. So it's about time we go over some of the basics of Android Auto. It's pretty much self explanatory, but still needs to be explained. Android Auto is pretty simple, basically you plug in your phone and your phone is now being run by your car. Pretty simple.

Compatibility is pretty simple. Any device that runs on Android 5.0 or higher should be compatible with Android Auto. However, if you run into a device that's not compatible, it's likely due to Google Play Services not being on the latest version. So be sure to check that, that is up to date. So far, we've tested the Nexus 6, Samsung Galaxy S6, HTC One M9, LG G4, and the Alcatel OneTouch Idol 3. All of these work – although the Galaxy S6 does seem to be a bit slow too boot into Android Auto, and sometimes doesn't want too.

We've already gone through the initial setup process. Which you can check out. Before we get started with set up, you'll need to download the Android Auto app from the Google Play Store. You'll also want to download your favorite podcatcher and music app. We'd recommend Pocket Casts, Stitcher, or Beyond Pod for podcast apps. And of course, we recommend you listen to the Android Headlines show.

At the top of every page in Android Auto, there's a slight status bar. Over on the right side, you'll see your phone's signal – however it doesn't show you if it's 3G, HSPA+, or LTE, unfortunately – as well as the battery, time and then there's the microphone for voice commands. In some apps, like Google Maps for instance, there is a Google Search bar there as well. The status bar is basically there to show you as little information as possible. For instance, you don't need to see what notification icons are on your phone right now, while you're driving. Which is probably a good thing.

Android Auto is still very, very new. So don't expect a ton of apps, right now. For the most part, we have messaging apps, and audio apps. And that's about it. You can choose from SoundCloud, Pocket Casts, Beyond Pod, Stitcher, TuneIn Radio, Spotify, iHeart Radio, and more are being added every day. It's actually pretty easy for developers to get started with Android Auto, and make their app compatible.

While you probably don't need navigation in every trip in the car, I do use Google Maps every time I'm in the car and flip the switch to show me the traffic. So I can avoid areas that have a ton of traffic, and save time. I've seen a few questions – specifically on Reddit – asking if you can just leave maps on without using navigation and still having Spotify, Google Play Music, or another audio app going. And yes, you can. I actually do it every time I jump in the car.

Since I use Google Voice aka Hangouts for all my calls, and not the stock dialer app, it doesn't work well with Android Auto. It doesn't ring through the car – in fact it just interrupts the music until you answer it. However messaging does work. You'll see a heads up notification that says the contact's name as well as "New message" and the name of the app. Which will mostly be Hangouts at this point. You can then tap on it to have the unit read out your message to you. 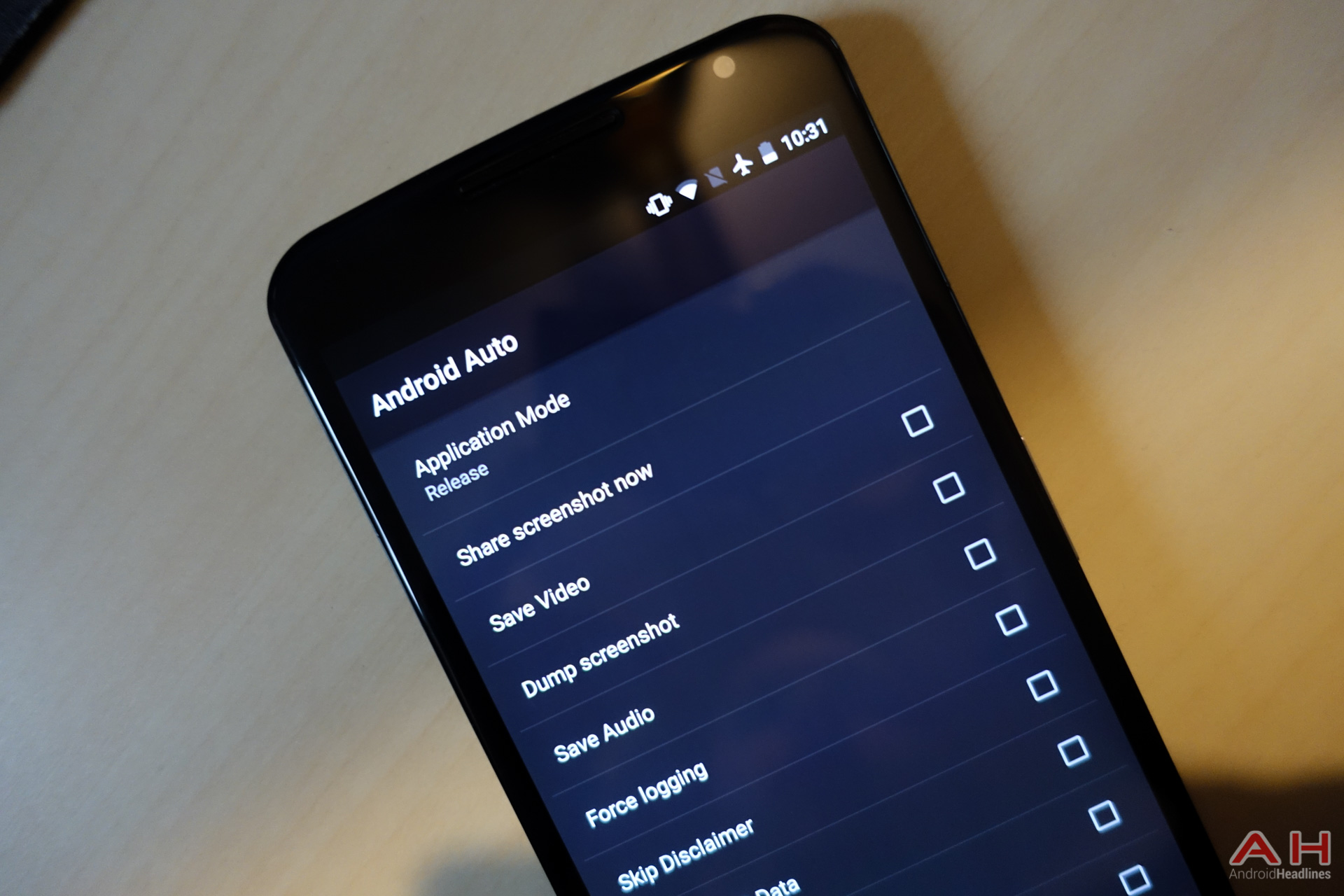 Something you probably shouldn't be messing with, especially on Android Auto. But if you're looking to take a screenshot, you'll need to use developer settings. Which you can get into by tapping on the picture in the Android Auto app about 7 times.

As expected, there is a night mode built into Android Auto. Basically it takes all the white portions of the UI and turns it black or navy blue. And it actually works pretty well. On our Pioneer head unit, it's supposed to change automatically from night to day based on the time of day, but that hasn't been the case yet. Seeing as it's near summer, and the days are longer now, we haven't done much driving in the dark yet. But it's something we'll be expanding on in the near future as we do more Android Auto content.

That button all the way over on the right side, the one that no one really knows what it does. Basically that's there for car makers and aftermarket head unit manufacturers like Pioneer, Kenwood and others to add their own features. They can add in links to more Android Auto apps (similar to what's in the Android Wear app that takes you to a list of Wear apps on the Play Store), also add a roadside assistance feature, which would be important as well.

Advertisement
Trusted By Millions
Independent, Expert Android News You Can Trust, Since 2010
Publishing More Android Than Anyone Else
8
Today
62
This Week
8
This Month
1854
This Year
103333
All Time
Advertisement