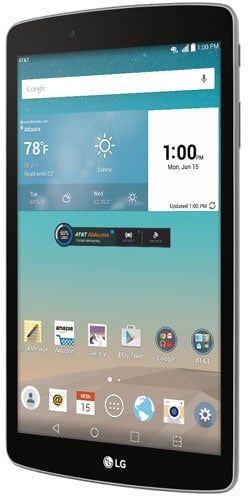 Not long ago AT&T launched a tablet which received attention, not because it was the first 8-inch tablet (almost all companies have manufactured one and a long time ago), but because it was the first 8-inch AT&T branded tablet. It was less than two weeks ago that the news came through and now there is another 8-inch tablet that will launch on AT&T. This one is not AT&T-branded though, it's LG's. For those who are fans of LG and tablets at the same time, the LG G Pad F 8.0 will launch on AT&T on May 29 for $0 down and 20 monthly payments of $12.50. You also have an option which reads $149.99 with a two-year contract.

This 8-inch tablet offers an "HD+" display. What takes care of all the "processing" is a 1.2 GHz quad-core Snapdragon 400 processor. The storage has a size of 16GB, but there is also a microSD slot in case you feel the need for more space, taking into consideration that some of that space is already taken. But since the rear camera is a 5-mexapixel one, you probably won't need to worry about how much space photos are going to occupy. That is, unless you take a lot of them. It also features auto-focus. While, the battery is a 4,200mAh one. This battery is expected to help you work with the device for 9.5 hours. If none of these specifications are impressing you, then perhaps this one will: there is also a full-size USB port present on the device. This alone will be a selling point for the device and will provide those who prefer to use a full-size USB cable a tablet option.

The software running on the LG G Pad F 8.0 is Android 5.0, otherwise known as Lollipop. And the user interface, as you probably might have guessed, is LG's custom one. Many of the features which make LG unique are there too. These features include the likes of Dual Window and QPair. The second feature one which lets you answer calls that come through to your paired Android smartphone on your tablet. Not to mention, you can also reply to messages on that paired device too.