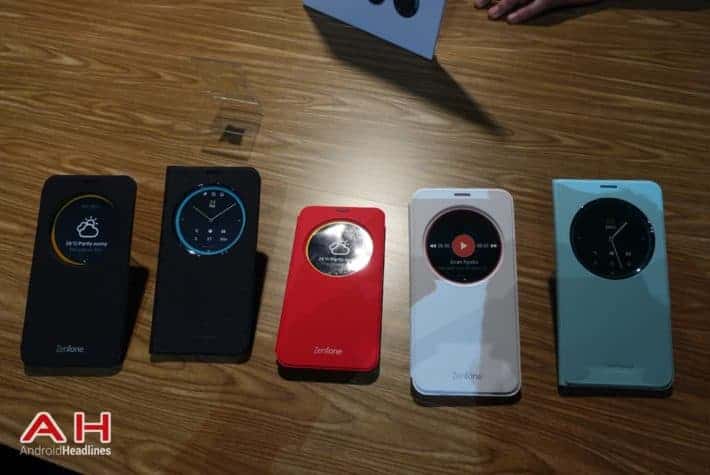 ASUS officially announced the details for the U.S. availability of the ZenFone 2 this morning along with the availability in Canada, but showing off the device they originally announced back at CES in the beginning of 2015 wasn't the only thing on the agenda. ASUS also showcased, albeit very briefly, a few different accessories that will become available to consumers alongside the U.S. phone launch, although this isn't the first time ASUS has mentioned these accessories for their 2015 flagship device.

First highlighted was ASUS lineup of Flip Covers for the ZenFone 2 called the FlipCover Deluxe, which is not too unlike those offerings which Samsung and LG, as well as a handful of other OEMs made available for their current and previous flagship devices. The cases will come in a range of different colors and will be available for $39. ASUS also showed off the ZenPower battery pack which comes with 10,050mAh of battery power to recharge your device at a moments notice, and thanks to the ZenFone 2's BoostMaster technology the device gets 4 hours of talk time use in just 10 minutes. So not only can take you charging with you so it's as mobile as you and your phone, but you'll get plenty of battery life in no time at all. The ZenPower will be available for just $19 and come in five different colors of black, white, pink, gold, and blue.

ASUS also showed off two different flash accessories meant to give you some additional lighting capabilities for use with the camera. The first is called the ZenFlash and is a little microUSB connectable Xenon Flash dongle which plugs into the microUSB charging port on the bottom of the phone, and attaches to the back of the device acting as a separate, larger and more powerful flash than what's baked into the phone with the rear-facing camera thanks to being 100 times brighter than the standard LED flash according to ASUS. This will end up retailing for $29. Lastly, was ASUS' Lolliflash accessory which pays homage to the Android Lollipop software as it takes on a small and rather cutesy Lollipop style design, coming in multiple colors (red, white, black, blue, and yellow) for just $14.99. The idea behind the Lolliflash is that it plugs into the phone's 3.5mm audio port up top to provide the user with a dual-tone LED torch light for extra lighting. All of these accessories should be available from tomorrow alongside the phone which will be selling on Amazon among other online retailers.