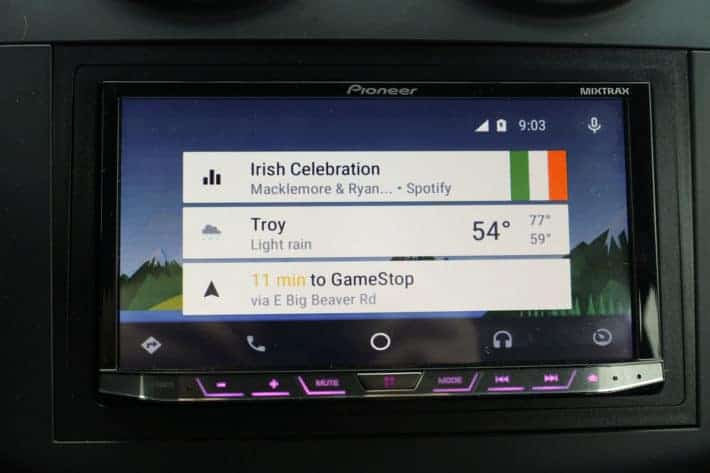 Now that we have Android Auto in house and have been using it for a few weeks, it's time to take a closer look at some of the features in Android Auto. Today, we're looking at the Overview screen. The overview screen will remind you a lot of Google Now. You have the Google Now-esque cards there that give you plenty of information. By default you get the weather in your current location, as well as navigation to places you've searched for in Google Maps. Now this is pulled in from your phone but also searches from any other device you've used, even your laptop.

If you have music playing, or navigation running, you'll see a couple of new cards displayed at the top. There's a navigation card, as well as a now playing card. Which we'll take a deeper look at the audio in Android Auto later on. The Overview screen doesn't show you everything Google Now would. For instance you don't need sports scores, or news headlines while you're driving. However, one card that Google Now has that I'd like to see implemented into the Overview screen is the "Photo Places nearby" as well as the restaurants nearby. As that would help you find a great place to grab dinner, or a great place to get pictures, especially if you're a tourist in a new area.

For those that don't know, the middle button that is a circle takes you to the overview page on Android Auto. It's kind of like the control center for the system. The button all the way on the right side isn't really used right now. But from what we can see, and have been told, that is there for the carmaker to include some extra features like roadside assistance and such. Which is a great addition to Android Auto. Right now you can pick up one of three Pioneer head units starting at  about $550 from Amazon that does Android Auto – it also does Apple's CarPlay if you're interested in that.