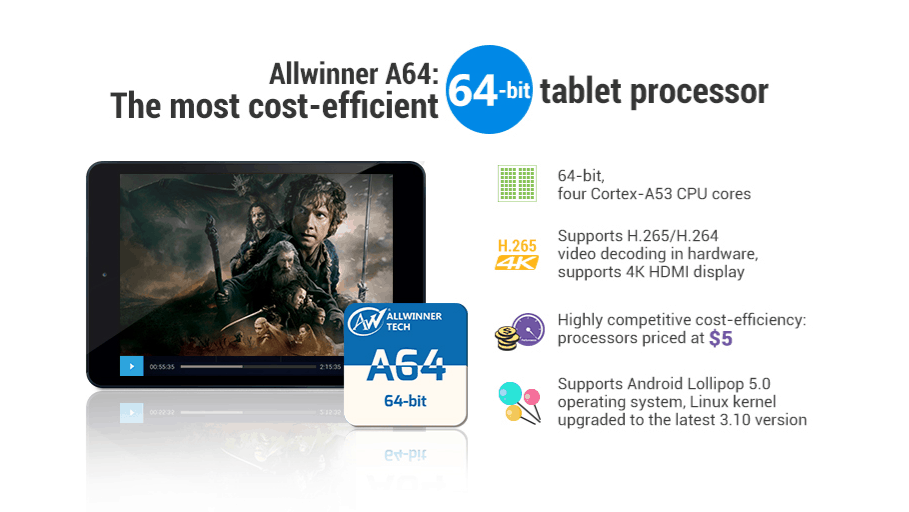 Go back three years and Allwinner were the number one Android tablet System-on-Chip (SoC) supplier across the world. Allwinner made a name for themselves by providing a competitive processor package at a great price with something of a bias towards power efficiency. They provide processors for tablets and set-top boxes, amongst other mobile and entertainment products. Unfortunately for Allwinner, the Android tablet market has evolved and become more sophisticated. Customers are demanding a better performing, closer integrated tablet and whilst there remains a market for budget models, Allwinner have found stiff competition at the bottom end of the market, especially from Intel, which have been pushing the Intel Atom processor with a number of incentives for manufacturers (although these have been reduced or stopped). At the end of 2013, Allwinner lost the number one position to Rockchip, the number one Chinese SoC manufacturer. Then, in the middle of 2014, MediaTek overtook Allwinner and now, despite the changes Intel have implemented to their incentives to tablet manufacturers, the supplier website DigiTimes expects Allwinner to have surrendered the number three spot to Intel at the end of 2014.

Undeterred, Allwinner has continued to develop and evolve their product line, offering tablet manufacturers a competitive processor product at a rock bottom price. And today, the story is that the new Allwinner A64 processor is being prepared for release. The A64 is a quad-core, 64-bit processor based around the ARM Cortex-A53, a processor core already known to be energy efficient. The A64 offers 4K video decoding, HDMI out and supports Android 5.1 Lollipop right out of the box. The A64 shows its tablet bias by only supporting cameras of up to 5MP resolution and it does not offer a mobile network modem. There is also relatively limited support for screen resolution, but to cap all of this is the unit price of just $5 per System-on-Chip. As it stands, then, the Allwinner A64 looks to be a competitive processor for the inexpensive market. We've already seen how the Cortex-A53 processor core offers respectable performance and as a newer generation processor, it supports Android Lollipop (and later) running Android in 64-bit mode.