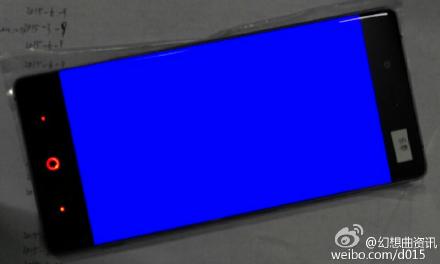 ZTE has recently launched the Nubia Z9 Max and Nubia Z9 Mini handsets, and the third member of the Nubia Z9 family will follow shortly. This China-based company will announce the 'bezel-less' Nubia Z9 on May 6, and we already have a ton of info regarding this device. The handset has leaked in numerous images, ZTE's General Manager has confirmed that it will be bezel-less and offers special features, and the phone was even listed on TENAA. Speaking of which, the specifications that were mentioned in TENAA's listing seem way off, 3.5GHz octa-core processor and 8GB of RAM just seem unrealistic. Either way, we'll find out everything in about a week. Until then, we do have some new images to share with you.

A new set of Nubia Z9 images leaked in China, and these images go hand-in-hand with basically everything we've seen thus far, this design seems like a sure thing at this point. Anyhow, as you can see in the images down below, the Nubia Z9 will sport a metallic frame with chamfered edges. Glass panels will be placed both on the front and back side of this device, and the whole design seems really sleek. There is one image in the gallery where the phone is turned on and you can clearly see that this handset doesn't have any bezel on the sides, aside for the fact it has that metal frame, of course. This also hints at a really narrow design, and if TENAA's listing is to be believed, this handset will sport a 5.1-inch display on the front and will measure 144.9 x 72.1 x 6.4mm. The general design resembles the design of the Nubia Z9 Max and Z9 Mini, but tat was to be expected.

The Nubia Z9 is expected to feature a 5.X 1080p or QuadHD display on the front, if TENAA is to be believed, we're looking at a 5.15-inch panel here. The phone will also quite probably be powered by the Snapdragon 810 64-bit octa-core SoC clocked at 2.5GHz and sport 3 or 4GB of RAM, despite the fact TENAA's listing claims it will ship with an SoC clocked at 3.5GHz and 8GB of RAM. Those specs are out of this world and seem really unrealistic at this point, but we'll find out everything soon. The phone will also offer 16 and 8-megapixel camera's that can be found in the two aforementioned and already available devices, and you can also expect this thing to ship with Android 5.0.2 Lollipop pre-installed.