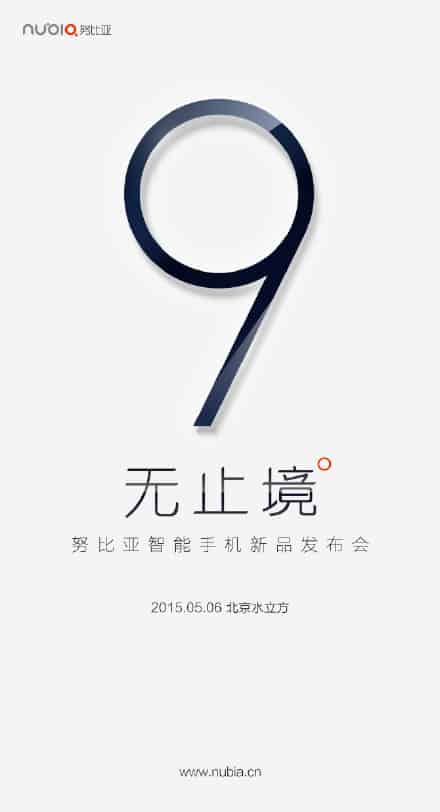 The smartphone bezels are becoming slimmer and slimmer. We've been seeing a lot of smartphones either teased or released already which have almost no bezel on the sides, and one such device is going to arrive soon. The ZTE Nubia Z9 has been leaked a ton of times up until now, this device has been leaking for about half a year now. This China-based smartphone OEM has released two out of three devices from the Nubia Z9 flagships line, the Nubia Z9 Mini and Nubia Z9 Max have launched last month, and arguably the most interesting device in that line still has not. The device in question is the Nubia Z9, which will launch on May 6.

Earlier this month, ZTE's General Manager has confirmed that the Nubia Z9 is 'coming soon' and that it will feature bezel-less design. Well, the company has released a new teaser image on their official Weibo (China's social network) account which basically confirms that the device will launch on May 6. This image in quite an obvious hint, it contains a big number 9 and the date below it. This handset is expected to sport a premium design and will probably resemble the Nubia Z9 Mini and Nubia Z9 Max a whole lot, but it will have significantly slimmer bezels on the sides.

The Nubia Z9 is expected to feature a 5.X 1080p (1920 x 1080) or QuadHD (2560 x 1440) display along with 3 or 4GB of RAM and 32 or 64GB of internal storage. Qualcomm's Snapdragon 810 64-bit octa-core processor will quite probably power on this device along with an Adreno 430 GPU. The 16 and 8-megapixel sensors will be available on the back and front of this device respectively, the same ones that can be found on the Nubia Z9 Max and Nubia Z9 Mini actually. Android 5.0.2 Lollipop will come pre-installed here with ZTE's Nubia UI 2.8 on top of Google's operating system. You can also expect this device to sport 4G LTE connectivity and it will also quite probably sport dual SIM connectivity as well. This handset will most likely ship with a non-removable battery, and you can also expect it to feature a microSD card slot.