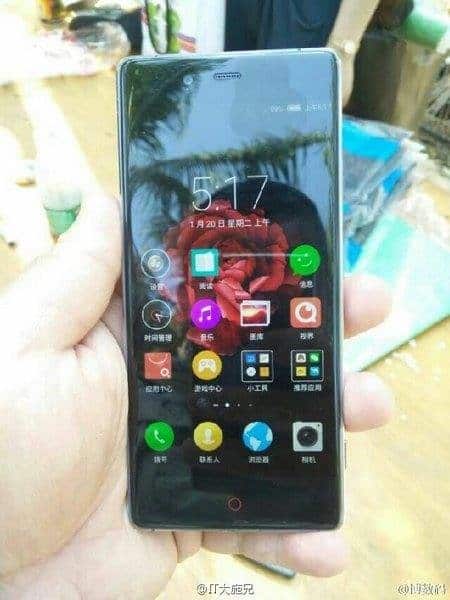 ZTE has announced two out of three devices in their flagship Nubia Z9 line recently, the Nubia Z9 Mini and Z9 Max. The company has announced these two devices at the end of last month, though they did not reveal the third one, the Nubia Z9. This handset is arguably the most interesting one out of the three, mainly because of the extremely thin bezels it will sport on the sides. ZTE's General Manager has revealed quite recently that the Nubia Z9 will launch soon and that it will sport bezel-less design. That's not all though, ZTE has posted a teaser image yesterday touting the launch of this handset for May 6th.

We've seen a ton of leaks showing us the alleged design of the Nubia Z9, and we have a new image to share with you today. As you can see, the handset pictured in the image above actually does resemble some of the previously leaked devices, and it also resembles both the Nubia Z9 Mini and Nubia Z9 Max. We've seen all sorts of different designs leak in the last 6 months which claimed to be the Nubia Z9, but it seems like this is the one. The last couple of leaks we've seen actually confirms this design choice (except the odd one which appeared the other day), we cannot be entirely sure of course, though everything will be revealed on May 6.

The handset pictured above has extremely thin side bezels, though it looks somewhat tall because of it. its bezels above and below the screen aren't really the thinnest, so it will be interesting to see how will this look in real life, presuming the leaks are accurate though, of course. The Nubia Z9 is expected to feature similar specifications to the Nubia Z9 Max. This means that the device will quite probably sport a 5.X 1080p or QuadHD display, will be powered by Qualcomm's Snapdragon 810 64-bit octa-core processor and ship with 3 or 4GB of RAM. The 16-megapixel camera will quite probably be available on the back of this device, and an 8-megapixel snapper will be located on its front side. Android 5.0.2 will come pre-installed on the Nubia Z9 with ZTE's Nubia UI 2.8 on top of it.