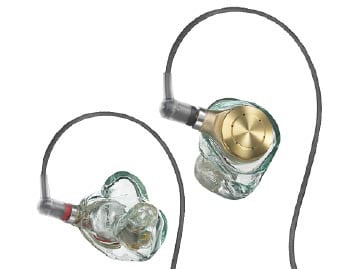 Sony is a huge tech company, a corporation which actually manufactures all sorts of stuff. As you probably already know, Sony is selling headphones, earphones, TVs, smartphones, tablets, smartwatches, gaming consoles, cameras… and a number of other tech products, not to mention that they manufacture certain mobile components as well. This Japan-based company is doing great in a wide array of those areas, but not the mobile sector. The company actually had to cut costs last year and have been reorganizing their business as well.

After announcing the new Sony Walkman ZX2 during the Consumer Electronics Show (CES) in Las Vegas, the company has now dropped a pair of earphones as well, called Sony XJE-MH1. Much like the Walkman, these earphones are really expensive, a lot more expensive than the Walkman actually. Sony is clearly aiming at hardcore audiophiles with their new custom-made earphones which are priced at $2,500. So, what is so special about these earphones? Well, for one, they will be designed to fit your ears believe it or not. They will also be designed to fit your sound environment as well, for example, Sony will find tune them to your liking.

Now, you may wonder how will Sony do all that for you. Well, when you order these earphones, Sony will collect your ear measurements and will ship the earphones your way. Keep in mind that you'll have to pay extra in order for Sony to custom fit the earphones to your ears though, an extra $70. Sony has actually released two variants of these earphones, the aforementioned XJE-MH1 are the customizable dynamic 2-way hybrid type with Balanced Armature (BA). The 'cheaper' alternative are the XJE-MH2 earphones which will ship with three pre-set sound quality modes: monitor, listening and club mode. The more affordable model will set you back around $1,700.

There you have it, these are Sony's new incredibly pricey earphones. One thing is for sure, not many people will be interested in something like this, but there are always those who are willing to pay such a price tag for something like this. Regarding the availability, we still don't know much, what we do know is that these earphones will launch in Japan first, that's it.