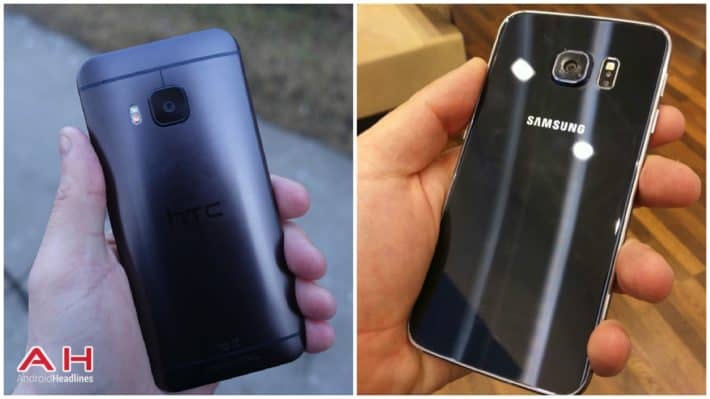 Today's the day folks, the day that the HTC One M9 and Galaxy S6 line are both available to purchase in the UK. While the One M9 has been available in the UK for some time now, the Galaxy S6 and Galaxy S6 Edge are joining it. If you were one of those that pre-ordered the device then your device might already be on its way to you, otherwise this weekend might be an expensive one for you. We recently put the HTC One M9 through its paces, and our review can be found in the reviews section of the site, with a Galaxy S6 review coming soon!

All three of these devices are now available on Vodafone's network in the UK, and we'll start the HTC One M9. This has been available for a few days now, with plans that start from £44 a month on 24 month contracts and is available in either Gold or Grey. That £44 a month will get you the device for free but you get just 2GB of data. Jumping up to £49 a month however gets you 4GB of data as well as the Red Value 4GB Bundle which adds inclusive calls to Europe and a choice of six months of NOW TV from Sky, Sky Sports Mobile or Spotify Premium.

The Galaxy S6 and Galaxy S6 Edge are, as you might've guessed a little more expensive. The Galaxy S6 starts at £49 a month with nothing upfront, while the Galaxy S6 Edge starts at £54 a month with £49.99 upfront. These prices include unlimited calls and texts and also puts you on Vodafone's Red Value 4GB Bundle which includes the same as above including 4GB of data. Those interested in staying with Vodafone can trade in an old Samsung device and save £5 a month on their monthly bill.

All-in-all, Vodafone is perhaps a little more expensive than other networks in the UK, but you do get 4GB for less than others and this includes six months free of Sky Sports mobile, Spotify Premium or NOW TV (which will soon start airing Game of Thrones again). More information on the Galaxy S6 and HTC One M9 on Vodafone can be found below at the source links.