Xiaomi is an interesting company and one who is certainly making a lot of waves within the android world and smartphone world, in general. Although, a number of their products are largely only available in certain markets, primarily, China, nothing can be taken away from how extensive their product portfolio is. Xiaomi offers a large number of products and all at a knockdown price compared to many of the other larger companies. This is one of the reasons why the company has quickly risen to become the largest android manufacturer in China and actually, the third largest in the world.

In fact, their products range as well as being large is also quite eclectic with the company branching out continuously into new markets. More recently, there has been somewhat of a focus by Xiaomi on the intent of things (IoT) and home connected devices. As such, you can now find XIaomi branded TV’s, smart bulbs and even air purifiers. What’s more, it seems there currently operating markets are extremely hungry for their products. It was only a few days ago that the company held their now-annual Mi Fan Festival 12 hour sale. The results of that sale saw the company break all records and amass significant sales which totaled 2.12 million smartphones alone. Remember, that was just during a sales period of twelve hours. In addition, the company managed to pull in more than a million accessory sales within the same period.

Well, there has been noise coming from Xiaomi news that the company is planning a launch event on April 23rd with a possible new product line. To add to the growing speculation, a new teaser has now emerged from Xiaomi suggesting something new might be coming sooner than the 23rd. In fact, on April 15th. The teaser image (shown below) states the date and seems to play on the notion of direction. The image seems to show a reference to ‘North’ and ‘South’. What’s more, reports have already picked up on the fact that one of the bottom listed partners is Ninebot, who makes products including a personal transportation robot. Therefore, the suggestion being made is that this quite possibly could be a GPS or navigation-based device. Either way, with the 15th only a few days away, it won’t be that long before all is revealed. 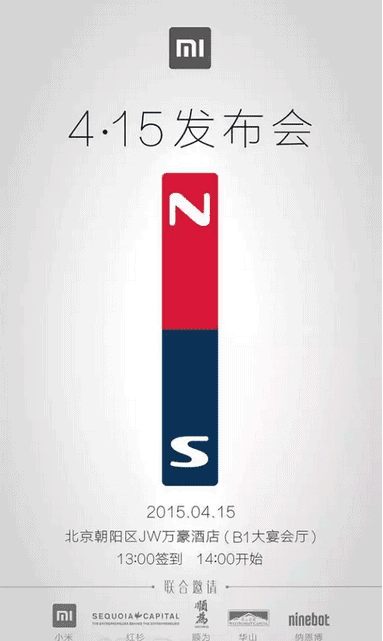