It is always exciting when a new study comes out regarding the Mobile scene and how it is changing the way we ‘look’ at the internet and how our habits are evolving because of our Mobile access.  Pew Research has just completed another study on Americans and their smartphone habits as it pertains to their access to the internet and how we are relying more and more on our smartphones as our sole source of broadband access.  In years past, people had to rely on their PCs or laptops to connect with the internet, but now that our mobile tablets and smartphones are taking over as our daily drivers, internet or broadband access is moving away from our stationary devices and ending up on our mobile devices…especially smartphones.

It was just announced about a week ago that 98-percent of Americans now have access to the internet.  The Pew report tells us that 64-percent of adult Americans now own a smartphone – an amazing jump from only 35-percent in 2011.  With this growth in smartphone usage, we are also seeing a growth in internet access via these smartphones…almost to the point of being dependent on our smartphones as our only means to use the internet.  Pew’s study did a survey to see if those that use their smartphones for internet access also had more traditional ways of accessing the internet – service at home or other reasonable options – available to them.

The survey showed that 10-percent of Americans that own a smartphone have no other access to the internet and 15-percent said they had limited access to the internet besides using their smartphone.  Some of these changes are brought about by our increase access to LTE networks and the high cost of home broadband and mobile data plans – often time consumers must make a choice in keeping home internet or the mobile access.  Affordability also causes the picture of mobile access to change – such as young adults (ages 18-29) are heavily dependent on mobile internet access.

This dependency also applies to income as the survey discovered that Americans with household incomes of less than $30,000 per year are more likely to use their smartphone for internet access, while just 1-percent of households earning $75,000 or more per year rely on their smartphone as sole access to the internet.  Still, though, 80-percent say their mobile device is worth the cost while only 19-percent say it is a financial burden. 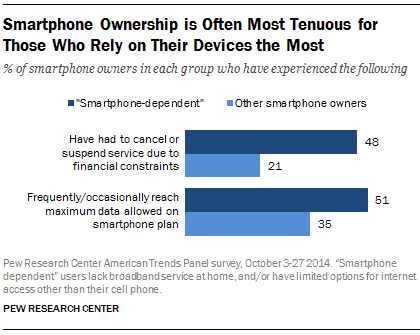