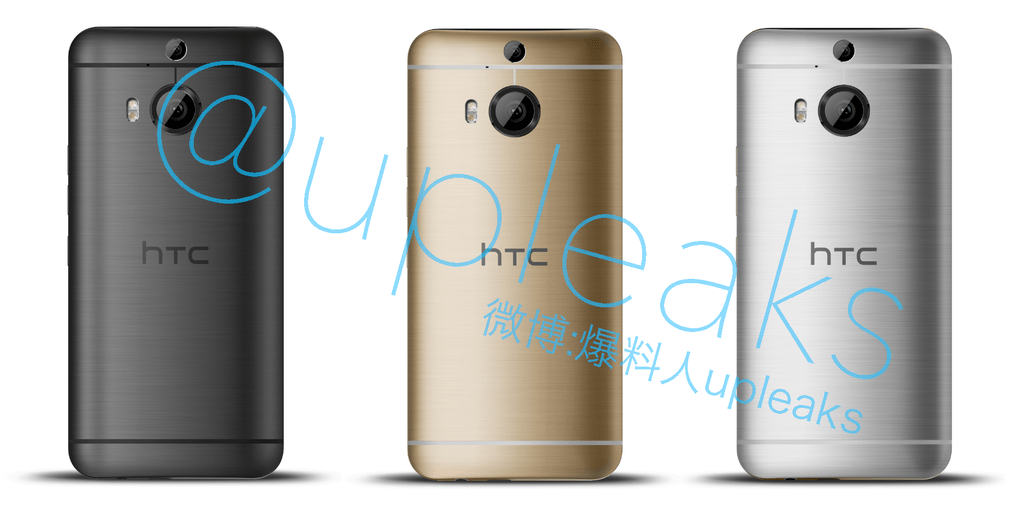 HTC One M9+ will launch on April 8th in China, the company has already scheduled the event, and renders just keep on coming our way. We've seen a ton of One M9+ renders thus far, the device has been shown off from every possible corner. Earlier today, seven new renders came our way, showing the device piece by piece. Just as we thought it's time to take a breath from all the renders, a new one popped up online, courtesy of @upleaks. The leaker has posted a new image showing off the back side of three One M9+ devices which are colored differently. If you take a look at the provided image, you'll see the Gunmetal Gray, Amber Gold and Silver versions of the upcoming HTC-branded device. You also get a good look at the Duo Camera setup on the back along with a dual-LED flash next to the camera sensors.

The One M9+ specifications have leaked several times thus far, and according to those leaks, this handset will come sporting a 5.2-inch QuadHD (2560 x 1440) display along with 3GB of RAM for your multitasking needs and 32GB of in-built storage. You'll find MediaTek's MT6795T octa-core processor under the hood and the PowerVR Rogue G6200 GPU will be in charge of graphics processing. 20.7-megapixel camera and an additional snapper above it (Duo Camera setup) will be available on the back of the device, and a 4-megapixel UltraPixel camera will quite probably be located on the front, though we're only guessing. Android 5.0 Lollipop will come pre-installed on the One M9+ with HTC's Sense 7 UI on top of it. HTC will hold a "More than One" event in Beijing on April 8th, where the company will announce this handset.

This Taiwan-based smartphone OEM has a lot going on at the moment. They've announced their One M9+ flagship last month, are going to announce the One M9+ soon, but that's not all. The One E9+ has been listed on HTC's Chinese website quite recently, and One E9 has also been rumored. One of HTC's Desire-branded devices has also leaked not long ago and the company plans to release the Desire 826 in India soon. This will be an interesting year for HTC, that's for sure. It will be interesting to see if they can increase their profits and get back to the right path.