It now looks like there is officially an app for everything – including measuring the smell of a fart.  After some research on farts, it seems there are all kinds of farts…brain farts, the anticipated fart, the bathtub fart…not to be confused with the shower fart, the Taco Bell fart, the splatter fart, the common fart and many more.  The word ‘fart’ is a shortened version of the technical or scientific name, called flatulence.  As defined properly, “Flatulence is the expulsion through the rectum of a mixture of gases that are byproducts of the digestion process of animals – mostly mammals and especially mammals that eat plants – carnivores are much less prone to flatulence.  The mixture of gases is known as flatus in medical terms, informally as a fart, or simply “gas”, and is expelled from the rectum in a process colloquially referred to as “passing gas”, “breaking wind” or farting.”  For some reason, people have a real attraction with the art of farting as validated by the number of fart apps.

This latest Kickstarter device, CH4, works on that premise – what you eat, causes different types and smells of gases, so the user can decrease the smell based upon what one eats.  The CH4 is a wearable device that you place in your back pocket or on the back of your belt loop…just so it is in close proximity to the source of the fart.  It senses the gaseous mixture and makes suggestions on what not to eat.  Now you may be asking yourself, “how does the CH4 know what I have been eating?”  That is easy enough to answer – you enter what you have eaten into the app on your smartphone and via Bluetooth, it compares what you have been eating with what gases you are omitting and makes its recommendations based on that data.  Oh yes, you do have to do a little work in order to make the CH4 an effective deterrent alongside the fight against farts…or should I say better-smelling farts.

Besides the embarrassing social situations, on a more serious note, gas can cause abdominal pain and discomfort, and CH4 may be able to help you avoid the foods that cause problems for you as an individual.  In the phone app you can be as specific as you want – put in broccoli or just salad – but the more detailed you are the better CH4 can determine exactly what foods are causing you ‘issues.’  CH4 is still in the early stages, and they believe it will take about 10 months to ensure the delivery of a finished project.  They are looking for $180,000 and so far have 40 backers and almost $2,000 with eleven days to go.  The iOS version will be out first, but quickly followed by the Android version. 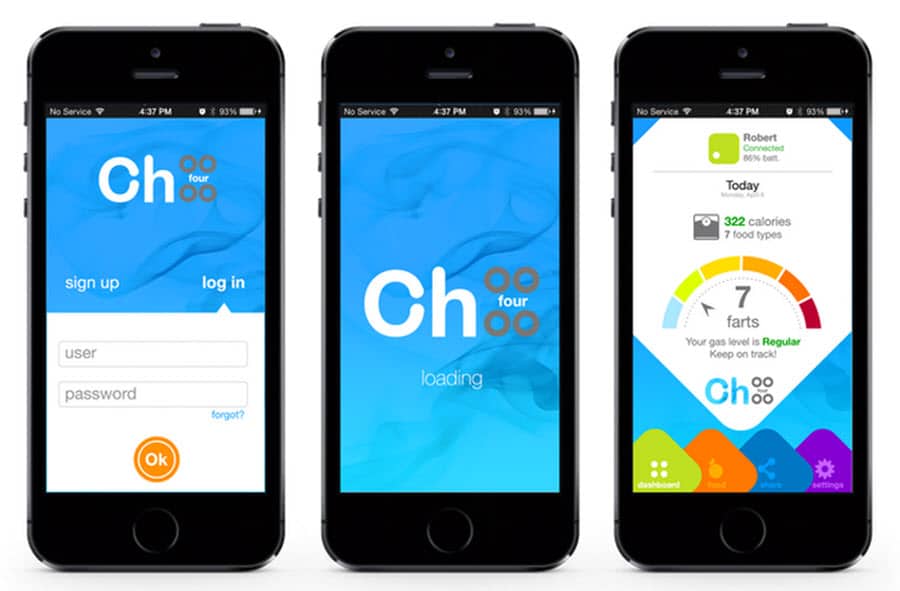