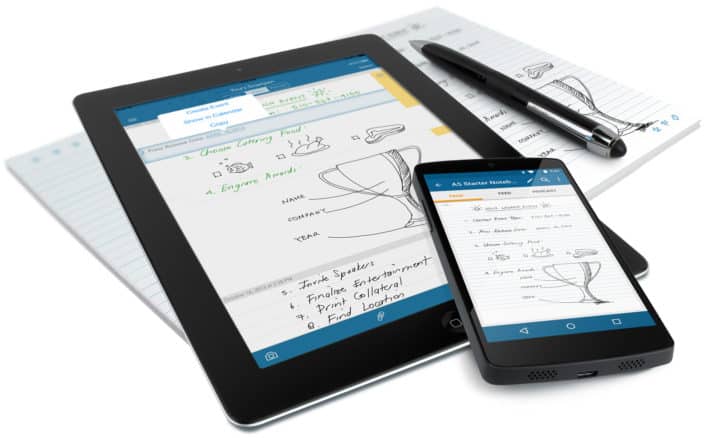 Smart devices are nothing new and can include nearly any device you might be using daily.  From watches to pens, phones to glasses it seems that nearly every device is becoming smart these days.  This gives users the ability to pair all of these multiple devices with a central device, most notably a smartphone or tablet, so as to effectively manage them as well as the time in any given day.  Livescribe isn't new to the smart game, in fact it was one of the first smart accessories created back in 2007 when the iPhone launched and the smartphone craze really started catching on.  Now Livescribe is on its 3rd generation smartpen, the Livescribe 3, and is ready to release an official Android app for use on any smartphone or tablet powered by Android 4.4.2 KitKat or higher.

For those unfamiliar with the Livescribe smartpen it's basically a way to store your physical notes in a digital format without any hassle.  Using special paper that's created just for the Livescribe pen users take notes, draw or journal and that information is intelligently stored in the pen itself.  This information can be easily transferred thanks to the special app that's being released today, making it easy to not only keep all those notes and drawings safe in a digital format that won't degrade, but also to search and share this information too.  The Livescribe 3 smartpen uses Bluetooth 4.0 Smart (or Low Energy as it was called) to talk with your Android-powered devices, and it also works with iOS as well if you've got an iOS powered device too.

Today's Android app release is a preview version, meaning it's not fully feature complete but will work as advertised.  The final version of the app is expected to have additional features such as the ability to add a security PIN to the smartpen so that information can't be grabbed by just anyway, as well as auto-backup of notes to cloud services and the ability to tag notes and add them to the Collections section of the app.  During this preview Livescribe is also putting the pen on sale through their website as well as through select partners, taking $25 of a new Livescribe 3 smartpen at checkout.  The regular price of the Livescribe 3 is $129.99, and the Livescribe 3 Pro Edition retails for $174.95 for those looking for additional value.  Check out the Google Play Store for both the Livescribe Link app as well as the Livescribe+ companion app for easy notes transfer, and of course be sure to check out the official website below for all the information you could want and ways to purchase.