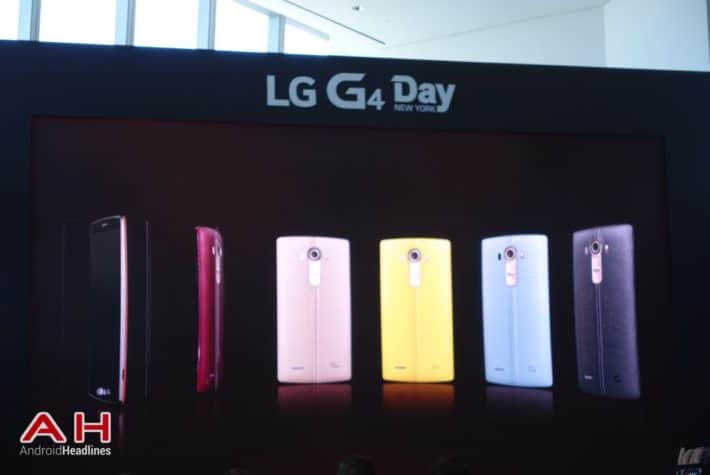 The LG G4 is one of the most anticipated devices this year. A number of major smartphone OEMs, like Samsung and HTC, have already announced their flagships and it's LGs turn. This South Korea-based tech giant is announcing their new flagship in New York and we're on the scene to bring you the news straight away. We've already seen a ton of LG leaks thus far, including the massive leak which revealed the design of the device in 30 images. Some spec information also leaked a while back, and we know for a fact that the phone will feature 16 and 8-megapixel sensors LG Innotek revealed quite recently. Anyhow, the event will start shortly, stay tuned to this article where we'll keep you updated on what's going as the event progresses.

LG has just officially unveiled the LG G4 at their live event, which they have confirmed is equipped with the f1.8 aperture camera with laser auto-focus, paired with an IPS quantum display which LG states helps the G4 offer a great visual experience with 20% more color range, and a 25% brighter display. The G4 will come with LG's human-centric UX4.0 on top of Android Lollipop, which consumers will get to try out first hand thanks to LG's consumer trial program.

LG has just invited Qualcomm up on stage to announce the processor specs, so now there is no more confusion on which CPU will be powering the device. It was rumored before today that it would be using the Snapdragon 808 CPU capable of 450mbps download speeds, and Qualcomm has just confirmed the Snapdragon 808 will be powering the device. It comes equipped with the Adreno 418 GPU which has 20% faster graphics performance than its predecessor.

The LG G4 has a nice slim arc that follows the entire body of the device, helping to deliver a 20% better durability. LG claims it feels more comfortable in the hand as well, and they gave customers what they wanted by taking away a little bit of the slimness to ensure a bigger battery, which is a high capacity 3000mAh removable battery that should be capable of lasting throughout the day. While the use of glass and metal looks elegant and very sleek, LG states the use of the treated leather helps to give the LG G4 an ergonomic design that fits well in the hand and helps give it more grip.

For those who are looking forward to the LG G4's camera for images, the camera features an all new manual mode which allows the user access to features they can modify like the shutter speed, ISO, and white balance settings. It also features something LG is calling quickshot for that allows the camera to snap off images quicker than other cameras. The use of the f1.8 aperture also allows for better low light capabilities, which allows the LG G4's camera let in 80% more light. This according to LG, afforded them the capability to get better images without putting in a higher sensor.

The camera also features what LG states is the world's first color spectrum sensor on a smartphones so it can read and understand the color around you to take the images with the color as you see them. It does this partly by having the capability to take in both RGB light and infrared light and combining them together to help produce the most accurate color for the images. The camera also supports RAW photo mode natively, which gives the user a little more control over the processing of the image. For the selfie takers, LG's new gesture shot mode allows you to snap shots by simply registering a unique gesture, and completing that gesture with the front camera.

With the Quantum IPS display on the LG G4 users will get 20% better color range according to LG, but they have also included features like the graphic RAM, LG smart power-saving UX and have restructured the the liquid crystals in the display to provide better battery life. As part of the new UX 4.0 on the LG G4, users will get access to extra Google Drive storage, getting 15GB initially when they start using Google Drive, but will also get an additional 100GB of Drive space for free. This is part of LG's push to give users the most Nexus-like experience possible by pre-loading Drive and other Google apps on the device and focusing on those specific apps and services. LG didn't stop there though as they also allow users to sign into the LG G4 with their Google ID instead of an LG ID if they wish. Other features of the new UX include a new memories feature which takes all the photos from a single event and bundles them together, and for those who like looking back at their images in sequence, the new Gallery Timeline feature will arrange pictures taken with the camera in a chronological order over time.