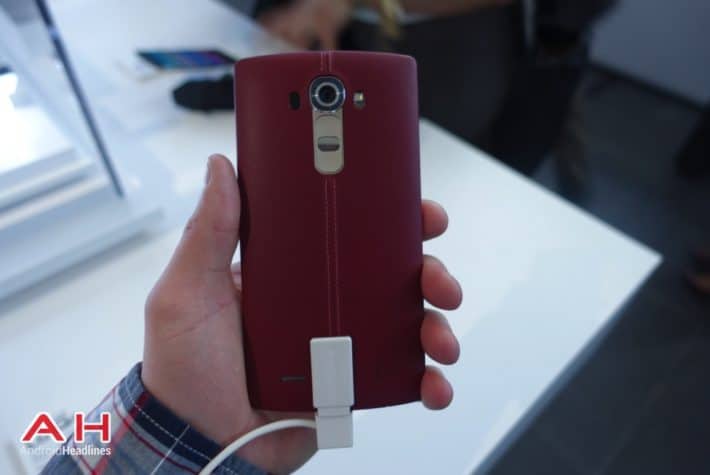 Today's the day folks, the day that LG finally announces the LG G4. As the follow-up to last year's G3, the G4 features a number of improvements over one of the first smartphones to introduce us to the world of Quad HD displays. We've seen many leaks and heard many rumors about this latest flagship from LG and it looks like many of them have come true. While the G3 was a technical marvel packing all sorts of specs into such a small frame, the G4 is its elegant, more refined younger brother.

On the inside, the LG G4 hasn't changed too much from the G3, the 5.5-inch display is still of the Quad HD variety, there's still 3GB of RAM on offer here, and crucially there's expandable storage as well as a removable battery. You can read more in our specs breakdown. The biggest change however, is not from the Snapdragon 801 to the Snapdragon 810, but to the Snapdragon 808. Instead of using the same octa-core CPU that HTC had opted for in the One M9, LG have gone a different route. The hexa-core CPU is said to run a lot cooler than the Snapdragon 810 and LG have said that this will lead to an overall smoother and more pleasant experience for the user. Qualcomm was on stage during the event, to tell the audience that LG and Qualcomm worked together very closely in order to finely tune the Snapdragon 808, with X10 LTE and excellent wireless performance. This Snapdragon 808 is powered by a 3,000 mAh battery which is user-replaceable.

The new camera has been a focus of the new G4, and rather than chase a higher megapixel count, the 16-megapixel camera builds on the G3's 13-megapixel laser-focus camera. It's capable of recording 4K video, which looks great on the 5.5-inch display. There's an IR-filter in the front-facing 8-megapixel camera which should make taking selfies even better than before. We've taken a closer look at the G4's camera suite here, but those looking for a full manual mode, the G4 is the phone to get. There are settings galore, and tied together with the f/1.8 aperture lens the G4 is one of the best smartphones out there for those looking to take great shots on the market. This is a larger sensor as well, up to 40% larger than others. The Optical Image Stabilisation has been improved and corrects more motion, as well as the new Color Spectrum Sensor, which essentially hones in on a red colored object – for example – and then the camera software adjusts accordingly, to make sure you get the best shot.

The 5.5-inch display this time around is a Quantum Display, not a Quantum Dot Display. This gives the display dCi Cinema-like quality images that look great. There's also graphic RAM and in crystal technology. These allow LG to keep the display bright and vibrant without sucking power. The graphic RAM allows a still frame – like an image, or a page of a book – to display without draining any more from the CPU and therefore the battery.

Taking about the fit and finish of the device, LG said that they had looked at the thin, metallic and glass devices and noted that they were difficult to hold, cold to the touch and fingerprint magnets. As such, the new Slim Arc design of the G4 makes it feel much better in your hand, and this gentle curve throughout the device helps it to be 20% more durable than other devices. LG wanted to differentiate the back of the G4 using genuine, real leather on the rear of the device to give it a warmth, and a natural feel in the hand that leather products often do. The leather version of the G4 will age over time and pick up colors and stains from your life, giving it a unique feel just for you. At 149.1 x 75.3 x 8.9mm, this is a small device to say it packs in a 5.5-inch display. If leather isn't for you, there are also textured, polycarbonate backs available, too, in a variety of different colors.