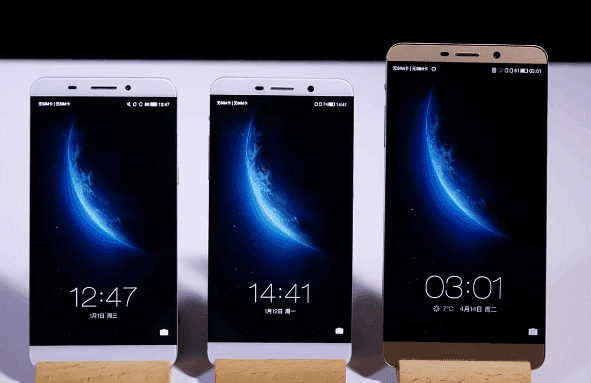 Letv is a well-known company in China, though smartphone manufacturing isn't exactly their main priority, well at least it wasn't up until now. Letv's smartphones have been leaking for quite some time now. Two models leaked out, the X600 mid-ranger and the X900 bezel-free high-end flagships handset which managed to get a lot of press. Letv has announced that they'll hold an event in Beijing on April 14, which is today. The company has announced the much-rumored devices, and we're looking at three new devices here, not two. Anyhow, let's check out what Letv unveiled, shall we.

The first device this Chinese smartphone OEM announced is the Letv Le 1 1 aka Letv X600. This is the lowest-end out of the three, though this handset offers really solid mid to high-end specs actually. This device features Sharp's 5.5-inch 1080p (1920 x 1080) display along with 3GB of LPDDR3 RAM and 16GB of internal storage. This handset is powered by MediaTek's MT6795 64-bit octa-core processor and it will ship with a 3,000mAh battery on the inside. The 13-megapixel camera (OIS included) is located on the back of the device and below the sensor itself you'll find a dual-LED, dual tone flash. The 5-megapixel snapper is available on the front side of this device, and we're talking about a dual-SIM handset here. The Letv Le 1 weighs 170 grams and comes in White color option only. This device is made out of plastic and glass.

The second device that Letv announced is the much-rumored Letv X900 aka Le 1 Pro. This device sports Sharp's 5.5-inch QuadHD (2560 x 1440) panel, 4GB of LPDDR4 RAM and 32GB of in-built storage. It's powered by Qualcomm's Snapdragon 810 64-bit octa-core processor which ships with an Adreno 430 GPU for graphics. The 13-megapixel camera is available on the back of this device and below it you'll find a dual-LED, dual tone flash. The 4-megapixel UltraPixel camera is available on the front side and should perform more than fine in the selfie / video call department. This device also ships with 3,000mAh battery on the inside and offers dual-SIM, dual standby option. The Letv Le 1 Pro weighs 177 grams and will be available in Gold and Silver color options. This handset is made out of metal and glass materials.

The last device Letv announced is the Letv Le Max. This handset is significantly bigger than the two aforementioned ones, it sports a 6.33-inch QuadHD (2560 x 1440) panel on the front (Sharp's unit). It is powered by the same Snapdragon 810 unit you'll find in the Letv Le 1 and it also ships with 4GB of LPDDR4 RAM. Unlike its smaller sibling though, it comes with 64GB of internal storage and a 21-megapixel rear-facing camera (Sony's IMX230 sensor, OIS included) which is also flanked by a dual-LED, dual tone flash. The 4-megapixel UltraPixel camera is also available up front and this device will also be available in Gold and Silver color options. We still don't know how big is its battery, but this device offers the same build materials as the Letv Le 1 Pro and is also a dual-SIM device. Unlike the other two device, this handset offers a push-to-activate fingerprint scanner.

Aside from announcing three new flagships, the company has also announced the new version of their Android skin, EUI 5.0 which is presumably based on Android 5.0 Lollipop. In addition to all that, all three of these devices sport a USB Type-C on the bottom, which makes them the first smartphones to sport such a port. There you have it folks, Letv has showcased the company's new flagships which seem quite powerful. Click here if you'd like to check out the first promo video for these devices, and you'll find quite a few images in the gallery down below showing off all of these devices.