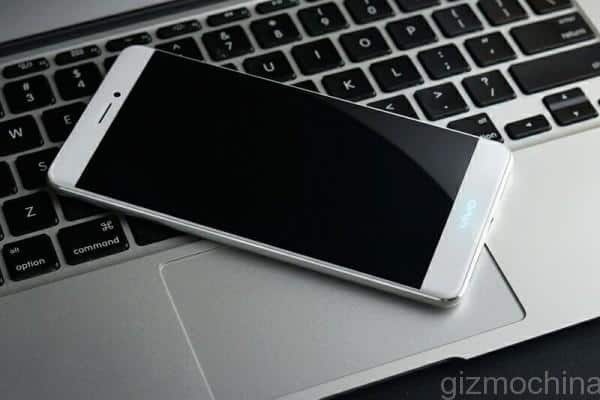 In the last few years, we've seen a trend emerge of Chinese manufacturers pushing the boundaries of what technologies are included in the next smartphones. Some years ago now, we saw Oppo launch the Find 5 with one of the first 1080p displays to hit the market. They then followed up with the world's first Quad HD smartphone with the Find 7. It looks like another Chinese manufacturer, Vivo is gearing up to launch a device packed with new technology, the X5Pro and now we're seeing yet another leak, this time around focusing on something entirely aesthetic.

We've been hearing a lot about the Vivo X5Pro, and for all intents and purposes it's shaping up to become one hell of a smartphone. A 6-inch Full HD display is rumored along with a USB Type-C charging connector and an interesting "Retina Scanner" included as well. This latest leak shows a device with a glowing logo just below the display. There's word that this could be used for a fingerprint scanner, but we have to wonder just how that sort of thing will work, but it's more than likely to be an aesthetic choice altogether. After all, why would there be a need for a fingerprint scanner as well as a retina scanner? Especially when Vivo has talked up the new technology so much.

We're guessing that this is more than likely going to be just another design feature to help the device stand out from the rest, but there's a chance it could be something more. With a massive 6-inch display, a retina scanner and all sorts of other goodies planned for the final release of this phone, it's likely that Vivo will have another winner on their hands. Other features include the ability to create 32-megapixel selfies by stitching images together as well as a Snapdragon 615 octa-core CPU powering the whole show. Vivo is set to announced the X5Pro come May 7th, and we'll have all the news just then.