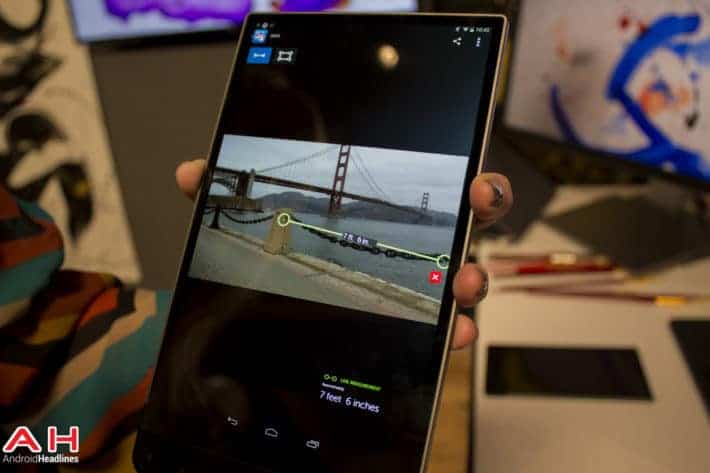 Over the years Intel has slowly moved from the PC powerhouse it was best known for and into the mobile computing space.  Once reliant on large, powerful and power-hungry processors Intel has designed new ranges of chipsets made specifically for phones and tablets that are made for low-power computing while still delivering great performance comparatively.  Intel has also been big in the camera game for laptops, specifically something called the RealSense depth camera, which as you guessed it is a pair of cameras designed to see the world as your very own human eyes see it.  This enables Intel and other OEMs who use it to scan the world around them and display actual depth and size information for use in various applications.

We actually saw this back at CES on the Dell Venue 8 7840 (pictured above), and it worked incredibly well.  Taking any picture from the depth camera included allows the user to actually measure the distance between objects and the size of those objects, with Intel's latest cameras being able to do this even more accurately too.  Today at IDF in Shenzhen, China Intel CEO Brian Krzanich showed off some new RealSense depth camera modules made specifically for smartphones this time.  These are smaller units that are able to fit in a 6-inch Intel-powered phone prototype shown on stage.  Krzanich didn't turn the phone on to show off the actual usage of the new RealSense camera while on stage, but there were some demonstrations using RealSense cameras at the show.

These demonstrations included a new partnership with Chinese online retail outlet JD which helps with scanning space in warehouses to create a better way to allot for shipments.  Intel's demonstration included a tablet with a RealSense camera that took pictures of a JD warehouse and was able to help quickly sum up how much space was available for new shipments and the shape and size of those shipments.  Intel also showed off a Windows 10 based tablet powered by a Skylake development kit with a RealSense camera on board used to scan faces for secure logging in.  This sort of application could be used in Android phones as well as Android has had face scanning log-ins since Android 4.0 Ice Cream Sandwich's 2011 release.