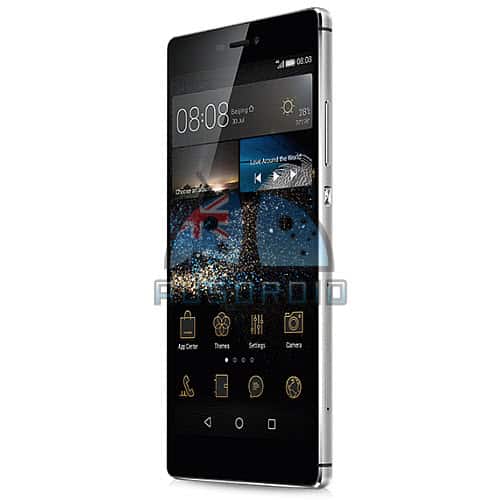 Huawei's P8 announcement event is just around the corner. The company has announced a while back that they'll announce their new flagship on April 15th. Huawei has released quite a few official teasers regarding this device, including the official teaser video as well. We've also seen a lot of rumors and leaks when it comes to the Huawei P8, and even the Huawei P8 Lite and Huawei P8 Platinum Edition versions have been mentioned. That being said, we have some new leaked images to share with you this time around.

If you take a look at the gallery down below you'll notice there are two images in there. These images are allegedly showcasing both of Huawei's upcoming P8 device, the Huawei P8 and Huawei P8 Lite. As you can see, these devices will sport extremely thin bezels on the sides and what seems to be a metal frame, which actually goes hand-in-hand with the previous leaks we've seen. The design seems really clean and sleek, though we'll have to wait 5 more days and find out for sure.

According to quite a few leaks and TENAA's listing, the Huawei P8 will sport a 5.2-inch 1080p (1920 x 1080) display along with 3GB of RAM and 32GB of internal storage. This handset will be powered by Huawei's very own HiSilicon Kirin 930 or 935 processor and will feature a 13-megapixel one the back (OIS will quite probably be included). The 5-megapixel snapper will be available on the front side of the device, and the Huawei P8 will come with Android 5.0 Lollipop pre-installed with the company's Emotion UI on top of Google's OS. 2,520mAh battery is also said to be a part of this package.

The Huawei P8 Lite, on the other hand, will reportedly feature a 5-inch 720p (1280 x 720) display, 2GB of RAM and 13-megapixel camera on the back. The 5-megapixel shooter will be located on the front side of the device and this handset will also ship with Android 5.0 Lollipop pre-installed with Emotion UI on top of it. Judging by these renders, it seems like both of these devices will sport premium design. Either way, the launch event is only five days away, stay tuned, we'll report back as soon as we get some additional details.