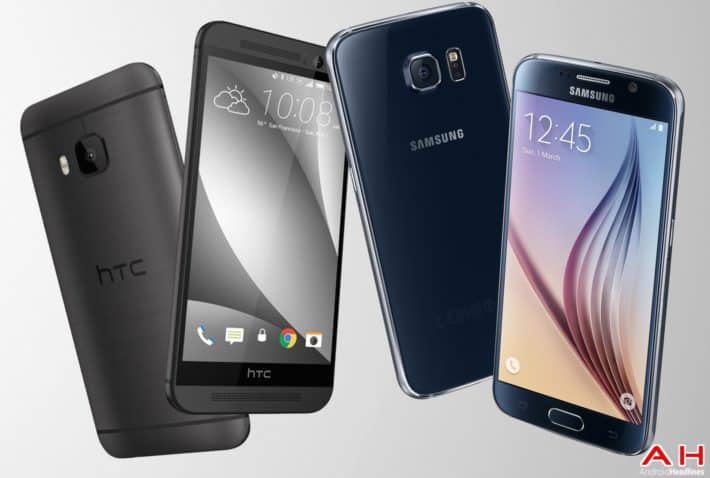 HTC and Samsung have launched their flagships offering for 2015 on the very same day, March 1st. These launches have occurred as part of the Mobile World Congress (MWC) in Barcelona, and all three of these devices are available for sale starting today. HTC One M9, Samsung Galaxy S6 and Galaxy S6 Edge handsets are available all over the world, including the UK. The devices are available via EE in the UK, and the carrier is offering all sorts of contract options with these handsets, and they're also available in various color options.

The HTC One M9 is available in Gold on Gold, Gold on Silver and Gunmetal Grey color combinations. You'll find all sorts of contract options from the carrier if you visit the carrier's website (source link down below), including the carrier-recommended 4GEE Extra plan in which you'll have to pay £49.99 upfront and pay £43.49 each month. There are of course far more affordable options without extra benefits of the 4GEE Extra plan. The Galaxy S6 and Galaxy S6 Edge devices are also available from EE. The Galaxy S6 is actually available on the same 4GEE plan as the HTC One M9, and the Galaxy S6 Edge is somewhat more expensive (keep in mind that prices depend on the internal storage size, there are various models available). The Galaxy S6 Edge will cost you £29.99 upfront + £53.49 per month on EE's 4GEE plan. There are a ton more options you can choose from, of course. Both of these devices are available in a range of colors and storage options, just follow the source link down below.

As far as specs go, the HTC One M9 features a 5-inch 1080p display along with 3GB of RAM and 32GB of internal storage (expandable via microSD card up to 128GB). This handset is powered by Qualcomm's Snapdragon 810 SoC and ships with a 20.7-megapixel camera. The Galaxy S6 and Galaxy S6 Edge devices sport a 5.1-inch QuadHD display, 3GB of RAM and 32, 64 or 128GB of internal storage (non-expandable). These two handsets are powered by Samsung's very own Exynos 7520 processor and a 16-megapixel (OIS) shooter is also a part of this package. All three devices have Android 5.0 Lollipop pre-installed, but with different OEM skins on top.