Google Wallet has been in the news a lot recently. In the grander scale, the news has surrounded the reinvention that is expected to come to Google Wallet in the coming future. This is designed to be something to more effectively take on Apple Pay's recent rise to prominence and seemingly unstoppable dominance. While, the more recent news on Google Wallet came this week when it was reported that Google seems to be unable to convince the courts that they did not breach privacy rules by giving out Wallet users personal details in the past. Well, regardless of Wallet's reported past or future, the app is still in its current form and that means updates are always going to be nearby.

Speaking of which, it seems an update is landing today for the app, which sees some interesting features being added. The first added feature is a very interesting one and looks to bring a more visual presence to your receipts. According to the Google announcement (source link below), when you purchase anything using wallet and receive your receipt, that receipt will come with a map of exactly where the purchase was made. As you would expect, this part of the update comes from the update seeing Wallet become more integrated with Maps. There is a two-fold logic to this aspect of the update. Of course, firstly, you will be able to visually see where you last purchased something while the second benefit is that you will have much better information on any fraudulent activity occurring on your account including exactly where someone else used your Wallet funds.

The second new feature is the ability to search in a more specific manner. Now, by hitting transactions, users will be able to search by specific keywords including by Merchant name or type of purchase. According to the announcement, the update to Wallet is rolling out from today so you should expect to see it arriving for your device soon. If, for whatever reason, you have yet to download Google Wallet then you can do so by clicking here and heading over to the Play Store listing. 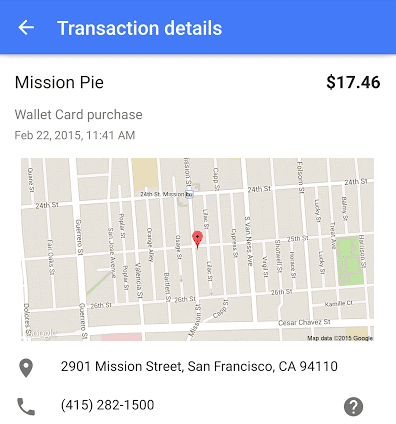