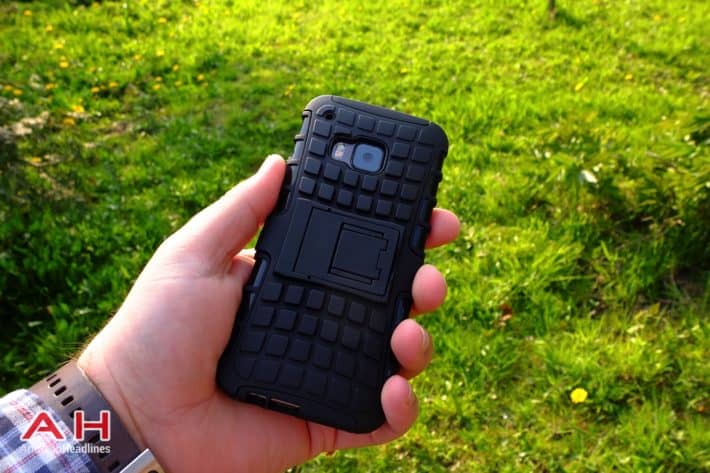 We’ve been reviewing a number of accessories for the HTC One M9 and Galaxy S6/Galaxy S6 Edge lately and today, we have yet another review for you. This one is perhaps more for our UK readers, and covers the Olixar ArmourDillo case from MobileFun. This is a fairly inexpensive option for those looking for something a little more rugged, a little more hardwearing. It’s a big case, and it makes use of that extra bulk by offering up a fairly neat kickstand to make watching videos on the move easier, and in general, it’s a case to keep your device extra safe.

This particular case feels good in the hand, it definitely adds some bulk to the One M9, but it doesn’t feel like you’re holding a giant potato or anything, The silicon feel is nice in the hand, and there’s a rigid sort of exo-skeleton that sits on top of the silicon case keeping everything nice and sturdy. I’m fairly confident that – tied with a decent screen protector – the ArmourDillo will keep an HTC One M9 nice and safe in the vast majority of circumstances. As far as looks go, this is decidedly masculine in the black option we have here, but there are other color mixes available, like blue and yellow for instance. The kickstand gets the job done, it adds a nice angle to the display, and it sits nice and level. Perfect for a tray table on a plane or on a train, for example.

For readers in the UK, this is available from MobileFun for just £12.99, which isn’t too bad at all, and those in US can find similar options from Amazon for similar pricing. This is a nice option for those prone to dropping their devices, but not in need of something like an Otterbox Defender. A middleground if you like, the Olixar AremourDillo is a strong case that gets the job done.