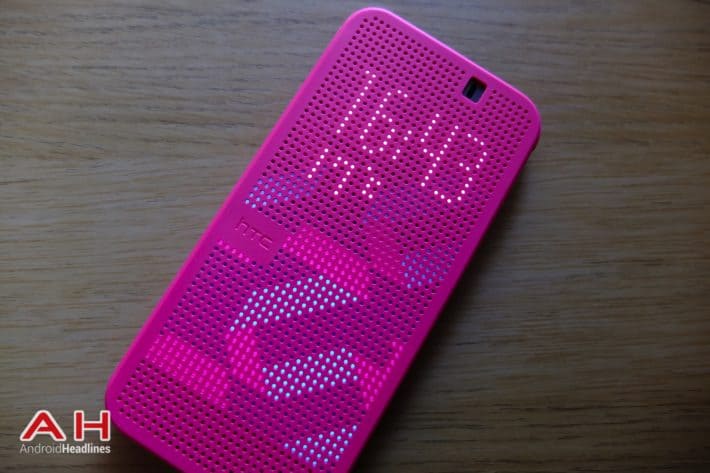 Last year, when HTC introduced the One M8, they introduced a new style of flip case to the market; the Dot View case. This case was a combination of a simple flap and some clever software on the phone that gave the HTC One M8 some good protection as well as simple, glanceable information like who's calling, what time it is and what the temperature is. It was a big hit with HTC One M8 users, and now, for the HTC One M9, it's back. We have an HTC One M9 on hand here – which we recently reviewed – and we'll be reviewing cases and accessories over the next couple of weeks, starting with HTC's official Dot View case provided by MobileFun, reviewed here in pink.

Before we get too far into the whole dot-display thing, what's the Dot View like as a case? Well, it's not all that much to write home about, really. This is the new version for the M9, but it really feels just like last year's, which means that it's made from rubber for the dotted flap cover and there's a harder plastic used around back. To the touch it's fairly grippy, and the neon pink color here might not be to everyone's tastes, but it's a nice option to see HTC using. Each edge of the phone is mostly left exposed, with only the corners covered by the back portion of the case, but I don't foresee major damage happening here. In practice, the Dot View case can be more of an annoyance than anything else. The front cover is resistive and sort of bounces back when turned round to the back of the phone, making it sort of bounce in your hand and taking a photo with the case on is far from ideal. It definitely looks the part though, and the Dot View case is almost part of the HTC One's DNA now, so if you want to keep this guy protected with a little more pizzazz than other cases, this is not a bad option.

On to the extras of the Dot View and anyone familiar with the first generation case will know exactly what's going on here. When you press the power button with the case closed it'll display the time, the weather and your chosen theme (of which there are many). This is nice for those that don't wear a watch and want to check the time when their phone is on the table without being rude and you can also configure it to show your most recent calls, too. Notifications that come in will be shown here, like an incoming call for instance, email, text messages and more. Not everything has a fancy animation, but many of them do. To me, the Dot View is a great case for someone that doesn't want a smartwatch, but wants nice and simple notifications put in front of them. The new themes – such as the holiday related live themes shown in the gallery – are all great, and there are now two fresh apps for the Dot View. A brickbreaker-style game and an app to help you draw your own Dot View theme and share it online. Both nice little additions that show off how something as simple and thoughtful as the Dot View can be a great extension of an already great device.

The Dot View case hasn't changed all that much, but it's still a great addition to the HTC One, and if you're looking for a well-built case that has something extra up its sleeve, then HTC One M9 owners have a great option here. Our only concern is that for a case, it's a little pricey, but then again this is a little more than just a case.

Advertisement
Advertisement
Trusted By Millions
Independent, Expert Android News You Can Trust, Since 2010
Publishing More Android Than Anyone Else
19
Today
51
This Week
159
This Month
4144
This Year
105621
All Time
Advertisement