Skip to content
Trusted By Millions
Independent, Expert Android News You Can Trust, Since 2010
Publishing More Android Than Anyone Else
5
Today
100
This Week
243
This Month
1113
This Year
127200
All Time 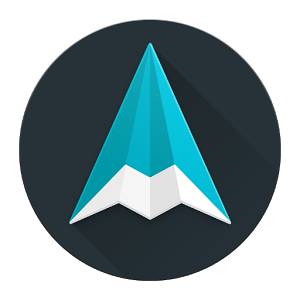 AutoMate is an Android app that aims to assist drivers with relevant information right when they need it. The app does this by making the services and apps that you normally use on your device readily available to you within a single app. On top of that, these services and apps are all one click, swipe, or voice dictation away. Maps, Places, phone, messaging, and music are all a single action away and readily available to you at all times with AutoMate.  This is designed to eliminate the distraction of using apps while on the road, and it does just that.

Now, due to the fact that AutoMate is currently a very new app and still in its beta stage, you will need to follow a few easy steps to get the app on your device. First off, you will need to go here, the AutoMate Google+ community. Once you are there you will need to click on the button, ‘Become a tester and download the app.’ This will take you to a page where you can then become a beta tester and download the app from the Google Play Store. After AutoMate is downloaded and installed you will be greeted with a nice, minimalist UI that is reminiscent of Android Auto. 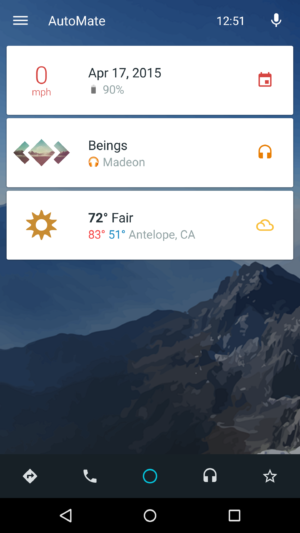 You will immediately take notice of the icon bar located at the bottom of the screen. Included in this bar of icons at the bottom of the screen you have maps, phone calls, home (as seen above), music, and shortcuts. Most of these tabs are pretty self-explanatory; Maps gives you access to Google Maps and other maps apps, phone lets you place calls to your contacts, and music lets you control your music on your phone. But let’s take a moment to discuss the tab that is not so self-explanatory, shortcuts. 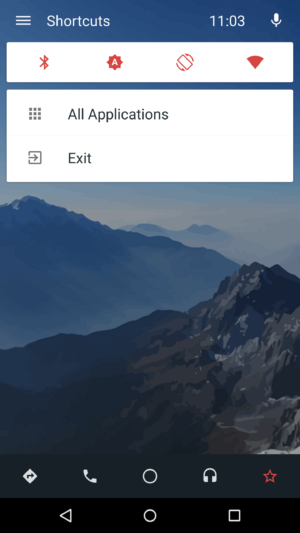 When you tap on the shortcuts tab you will be taken to a page that shows four quick toggles, Bluetooth, auto-brightness, auto-rotate, and Wi-Fi. Under those toggles, you have an “All Applications” button that will take you to a list of all the apps you have installed on your device. Tapping on one of those apps will launch it. Finally, under that applications button there is an “Exit” button, tapping it will close the AutoMate app. 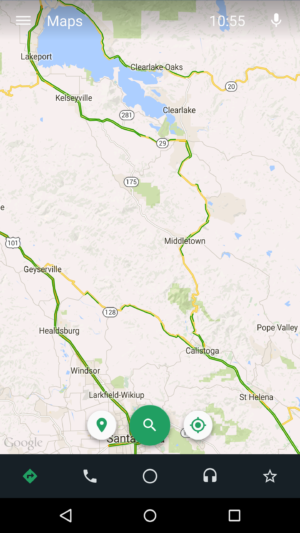 When I first began to use the AutoMate app I found myself using one tab quite a bit more than any of the other tabs, maps. I use Google Maps frequently in my life and having it now located in an app that also ties in with other services such as Google Play Music appealed to me. That leads me to my next talking point, the adaptive slide-out menu. 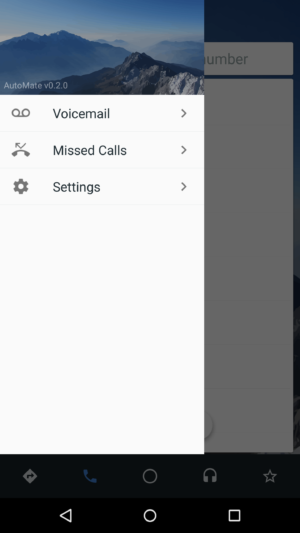 What I mean by adaptive slide-out menu is that the options in the slide-out menu differ based on which tab you are currently in. For instance, when you are in the phone tab and pull out the slide-out menu you get the option to access your voicemail and your missed calls. A nice feature that I found very useful, especially in the maps tab where you can tap on the places option and search for things like nearby gas stations. 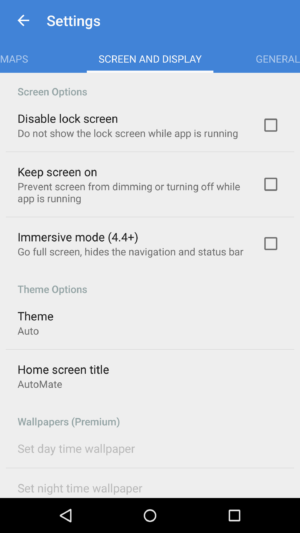 Now, let’s dive into the settings of the AutoMate app. Here you will find no shortage of options and things you can tweak and adjust. You can change things such as if you want your devices display to go to sleep while the AutoMate app is open. Or if you want AutoMate to open or close when a specific Bluetooth device connects to your phone. There are tons of things to mess with here that will allow you to tailor the AutoMate app experience to your liking. 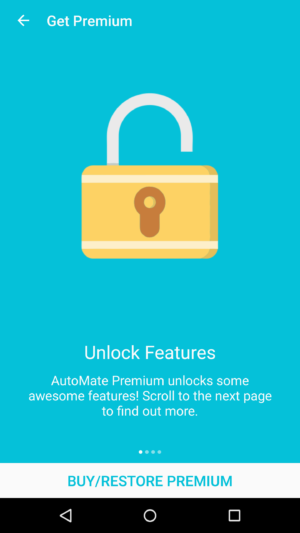 But if all of the features and options of the standard AutoMate app still don’t tickle your fancy, then you can upgrade to AutoMate Premium. AutoMate Premium will cost you $3.17 and it comes with a significant amount of extra functionality. With Premium, you will be able to do things like set AutoMate as your launcher, set custom backgrounds in the app, and set custom screen brightnesses for when the app is launched. These features and much more become available to you when you upgrade to Premium. 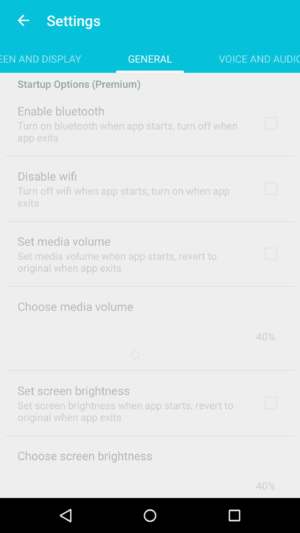 AutoMate is an app that is designed to be an alternative to Android Auto without the expensive head-unit and it does it very well. I even went out and bought a smartphone car mount and used AutoMate whenever I drove anywhere for a week and now I honestly can’t drive without it. The app makes using all of the essential services such as music control and phone calls easy and much less distracting while driving. Also, having your text messages read out loud to you while driving just gives people one less reason to look down at their phone.

AutoMate is a great idea that will ultimately make the roads a safer place with less people getting distracted by the smartphones in their laps or cupholders. As an added bonus the app just looks good and performs great, even though it’s still in beta. Imagine what this app will be like in the near future when it exits beta with likely more features and even better performance.