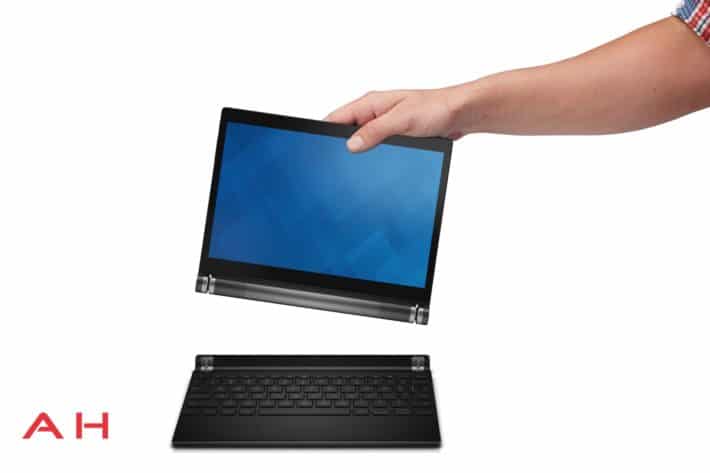 The Dell Venue 10 was announced earlier this month as an Android tablet designed for Google's new Android for Work initiative. Following on from the Venue 8 7000, this Venue 10 7000 is one hell of a premium Android tablet. It's powered by a quad-core Intel Atom Z3580 with 2GB of RAM, Android 5.0 Lollipop and features a massive 7,000 mAh battery. That strange bulge on the bottom of the device houses that large battery as well as the stereo speakers tuned by MaxxAudio Waves software. Plus, this part of the tablet is what secures the optional keyboard designed for those looking to get serious work done on the move.

This is a 10.5-inch OLED tablet with a 2560 x 1600 display resolution, and along with the specs listed above comes a hefty price tag. For the 16GB model, you're looking at $499, and if you want that with the keyboard it jumps to $629 and for a 32GB model with the keyboard it's $679. Clearly, this is not a tablet designed for those eyeing up a second-hand Nexus 7. Then again, it's not designed for those just looking for an Android tablet, Dell is positioning this as something people can use to actually get work done on the move, although it is a shame that the keyboard costs quite so much to get a physical keyboard up and running. With microSD card expansion and a massive battery, the Dell Venue 10 7000 is a great Android tablet for those looking for something larger with all the right specs.

It also features Intel's RealSense technology that uses the cameras on the device to determine how short or how long something is. it does this by estimating the objects' length with clever software that works with the cameras on the device. It's available to purchase from Dell right now, and while not cheap, it's one of the better tablets out there for those looking to get something done while away from their desk using Android. These devices are set to start shipping from the beginning of May.