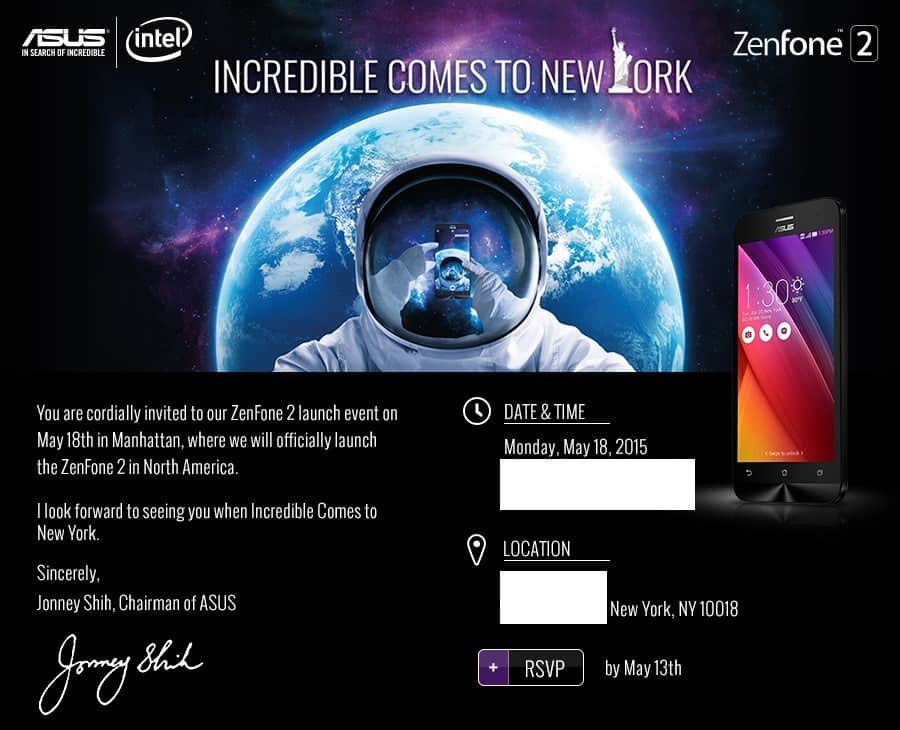 The Zenfone 2 has been getting lots of attention because it was the first – and only, still – smartphone to feature 4GB of RAM. There is also a 2GB of RAM model, so we are unsure which model we’ll be getting here in the States. But obviously we are salivating for that 4GB model. ASUS has been selling the Zenfone 2 2GB model on Amazon for a bit now. So it’s a bit interesting to see them holding an event in NYC to launch the thing. The ASUS Zenfone 2 has a 5.5-inch 1080p display with Corning Gorilla Glass 3 on top. It’s running on the Intel Atom Z3580 (4GB model) or the Z3560 (2GB model), along with 16GB, 32GB or 64GB of storage. ASUS also has a 13MP camera on the back with a 5MP front-facing shooter. Along with a non-removable 3,000mAh battery inside to keep it going all day long.

We’ll be there to see what ASUS has for us, even though we know pretty much everything about the Zenfone 2 already. It could be an AT&T exclusive, as most of ASUS’ devices do go to AT&T exclusively and never really land elsewhere. But we are hoping it’ll be available unlocked. While that wouldn’t help out Verizon and Sprint customers, it will at least expand the number of people that could potentially buy the device. The Zenfone 2 has been a pretty popular device, especially at the price that ASUS is selling it for. Currently it’s going for $279 over on Amazon for the 2GB of RAM model. It will definitely be interesting to see what ASUS have to say on May 18th. We’ll be sure to keep all of our readers informed, though.