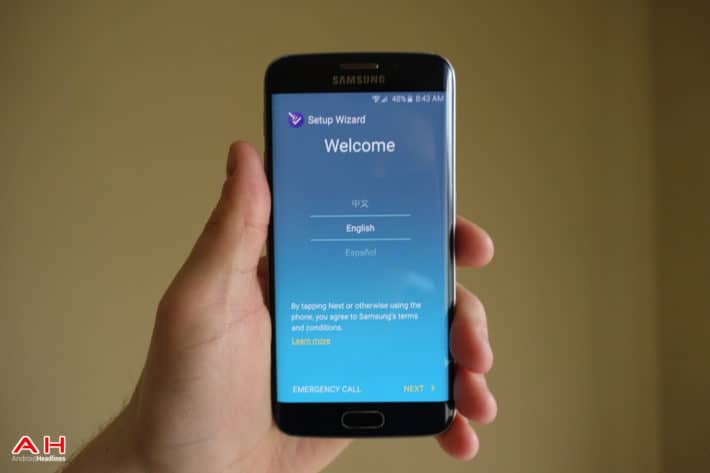 The very first thing you do when you get a new smartphone is turn it on right? And then start setting it up. The thing with Android is that no two smartphones setup are the same. Heck even the Verizon Galaxy S6 and Sprint Galaxy S6 setups are different. And that's due to the carrier's services and apps being integrated into the setup.

We have the Verizon Galaxy S6 here, and the setup is a bit different, but still largely the same. Of course, their Verizon Cloud service is built into the setup process – as one would expect – which does make it different. Through the setup process the device will be making sure that your phone is working properly with your SIM. So as soon as you choose your language and hit next, you are shown your phone number. Which shows that your SIM card is working properly. Then you'll be signing into WiFi (if needed), followed by setting up Verizon Cloud and all your email accounts. Gmail is separate actually. After you've set up those accounts, next up is Gmail, or Google. Once you sign into Google you can then choose to restore from another device. However, it will only show Lollipop devices, so there's a good chance that you won't have any listed there. You can also choose to set it up as a brand new device.

And that's not all. Samsung's services are still to be signed into. With the Galaxy S6, Samsung has made it possible for you to register a Samsung account using your Google ID. Which makes it easier for a lot of us to get logged in, as that's one less password we need to remember.

That, in a nutshell, is how you set up the Galaxy S6 or Galaxy S6 Edge. The set up processes are pretty much identical. After this is done, it's time to go into the settings and disable some apps you don't use. And there's plenty on all four carrier variants to disable. Then go ahead and jump into the Play Store and start downloading your apps, if you didn't choose to restore from another device.