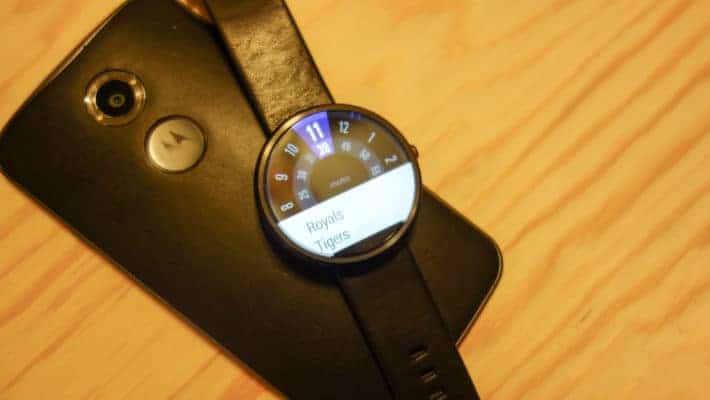 The Apple Watch arrived this week, and regardless of whether or not we want to admit it, it's going to have a big effect on the smartwatch and wearable market as a whole. While most of us can see that it's expensive, slow, not exactly what you'd call a timepiece and downright expensive there are many, many other users out there that will buy it just because it's Apple. We can't knock Apple for that, after all a brand cachet like that takes a long, long time to build. Lower price tags, more choice and a slightly more mature platform could work in Android Wear's favor, though.

Okay, so let's get this out of the way, the Apple Watch only works with an iPhone, but any Android Wear watch will work with any Android smartphone (running Android 4.3 and above, of course). That means that the Apple Watch will work with just one smartphone, where a Moto 360 will work with any Galaxy S, Motorola, Xperia or HTC One smartphone on the planet (within reason). I'm willing to bet that there are more users than we think out there that still don't give a damn what operating system is running on their smartphone. After all, the majority of average consumers know their Samsung smartphone to be a "Galaxy" not an "Android phone". If Apple were hoping that people who had owned an iPhone in the past were coming back because of the Apple Watch, then they might want to think again. The Apple Watch will become a desirable product, even if reviews have panned it as a product that needed a little more time in the oven, but where Google and Android Wear partners can win is on price and variety.

Mixed reviews for the Apple Watch – including the hilariously bias review from a certain site that scored the Moto 360 higher than the Apple Watch, yet calls the latter the most accomplished smartwatch yet – have all said that it's not great value for money and it's incredibly slow and notifications are more troublesome than they were without one. Android Wear watches like the Moto 360, G Watch R and Sony SmartWatch 3 are all less expensive, feature much better battery life and there's a choice of different devices, rather than just different watch bands and a flat-out disgusting price for a lump of gold.

There are probably more users out there willing to jump from their Galaxy S4, LG G2, first-gen Moto X or even a Galaxy S5 or something newer to an iPhone to get the Apple Watch than we probably realize. These users are the ones that Google and co. should be targeting. The introduction of watch straps available to purchase directly from Google is a good start, but there's more that can be done and if Google want Android Wear to be a success, they need to push things more with their marketing and if they don't, this time next year things might be very different. Of course, there's no telling the Apple Watch is even going to be a success, but 2015 is going to be a big year for wearable technology in general.