If you’re a business who uses Google’s set of tools called Google Apps for Work, you already know about how useful Hangouts can be for conducting meetings between different members of the staff. It’s especially handy as users are able to conference in from different device platforms like Android, Chrome, Windows etc. so they can be included in the meetings from where ever their current location happens to be. Google now appears to be working on a new tool however, that could end up replacing Hangouts for the go-to teleconference tool when people need to have meetings with multiple employees. That isn’t to say that Hangouts would be replaced completely of course, just that Google’s new tool could end up an alternative option for the same purpose with a little more gusto and more powerful features.

The new tool is called GMeet, and looks to incorporate the basis of Google Hangouts video calls with a functionality of creating events for specific meetings, which people can readily join with a simple click of a button. GMeet was spotted by Florian Kiersch and mentioned on Google+ earlier today where he points out that it seems to be an internal Google thing only at the moment. This leaves little in the way of details about whether or not it will end up as a consumer service/product that will be available to the public, and as it currently stands only Google employees are capable of logging into the GMeet service. However, Florian mentions that it is possible to join the GMeet as a guest if you have the event code or know someone who is already a participant of the meeting. There are also no details on what all the features of GMeet are.

There is a Chrome extension available for GMeet currently and the screenshots display an Android app interface so it would appear Google is looking to make use of the service available from either Desktop or mobile just like with the Google Apps for Work Hangouts calls, making it easy for people to join in no matter where they are. Whether or not Google plans to announce GMeet is unclear, but should they end up making it a full fledged consumer or business offering they will surely announce the arrival of GMeet before or as it goes live. 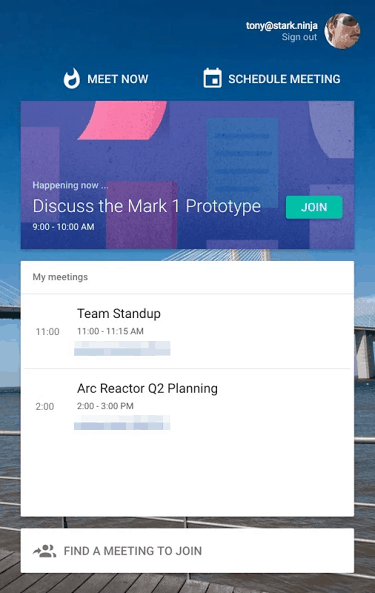