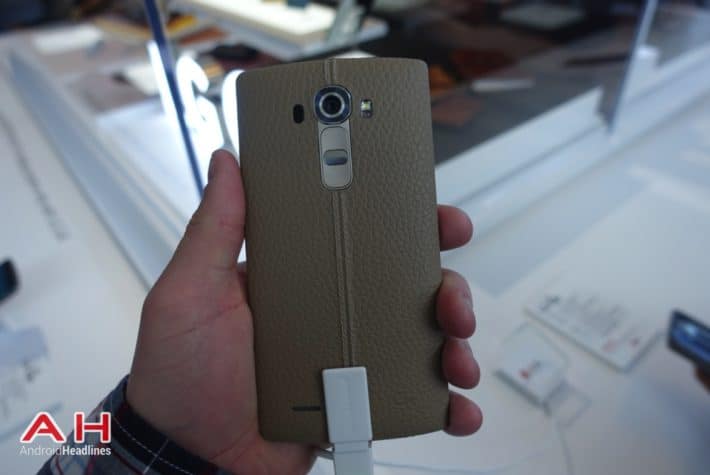 Earlier today, LG announced the G4, their latest and greatest Android smartphone. Following on from the G3 last year, the G4 is packed full of crazy technology and while it looks familiar to last year's device, there's so, so much more going on here. We were lucky enough to get hands on with the G4 just after their event finished, and so far we're impressed. Within that laundry list of specs there's always going to be a battery; everything needs power after all. Battery life has become a part of our lives, and many of us routinely make adjustments to our daily routines to accommodate our smartphones's battery. With the G4, LG hopes you won't have to. Let's take a closer look at the G4's fuel tank.

First up, the G4 keeps a large battery at 3,000 mAh in capacity. LG said that rather than shave some more thickness from the device, they were more than happy to create a thicker device and keep a larger battery. Not to say that the G4 is a thick device, by any means, it comes in at 8.9mm thick. To compare the Galaxy S6 and the LG G4, Samsung's latest features a 2,550 mAh battery. Plus, the G4's battery is entirely user-replaceable, allowing you to take spares with you wherever you might go. This 3,000 mAh battery is said to last 20% longer than last year's G3, despite the same battery capacity. To accommodate for a removable battery, LG doesn't ship the device with wireless charging, however they will offer a folio case that will add the ability.

Where timings are concerned, LG rates it for 440 hours of standby and 14 hours of talk time. Obviously, we've not had enough time to test it out fully to see just what it's made of, but we'll put it through its paces shortly. Every battery needs recharging and while the G4 doesn't support full quick charging, LG have said that you can get it up to 60% from 30 minutes of charging, which isn't too bad. It seems like there really are trade offs to making a battery user-removable, but we're willing to bet that there are quite a few disgruntled Samsung owners out there looking for a new phone with just that feature.