Android 5.1 Lollipop has been announced and out for more than a month, and it’s taken a little longer than some might have expected to reach some Nexus device models. For those that have been waiting to get the latest version of Android Lollipop on their LTE Nexus 7, which is the 2013 model with codename “Razorg,” that wait appears to almost over as it seems the update is beginning to roll out to device owners. Keep in mind however, that over-the-air updates can sometimes take days before they reach everyone, so you may not end up with the updated software until sometime this weekend or even sometime in the beginning of next week.

If you like to take matters into your own hands, the OTA software has already been pulled down and provided for users to flash manually, (you can download it from the link just above) but be aware that in proceeding with this process the software is not being put onto your device officially and so you’re flashing the software at your own risk, similar to like what users had the opportunity to do with yesterday’s drop of Cyanogen OS 12 for the OnePlus One. As of now, the only options for getting Android 5.1 onto your 2013 LTE Nexus 7 tablet, is to wait for the OTA to reach your device, or flash the OTA zip file manually as the factory images are not yet available. Having said this, flashing the OTA manually is probably easier than flashing the factory image anyway.

This brings the tablet forward to build number LRX22G up from build number LMY470. What’s odd is that the LTE version of the Nexus 7 has gotten the update prior to the WiFi model, which is usually the other way around. In any case, the update to Android 5.1 should come along with some nice little bug fixes and improvements, and it weighs in at a healthy but not overwhelmingly large 202MB in file size, which means you don’t have to worry about freeing up as much extra space as you might have for the original Android 5.0 update. As always we recommend to keep a mostly charged battery before starting the download and update installation process, as it can sometimes take more than a few minutes to complete and you wouldn’t want your tablet powering down in the middle of it. 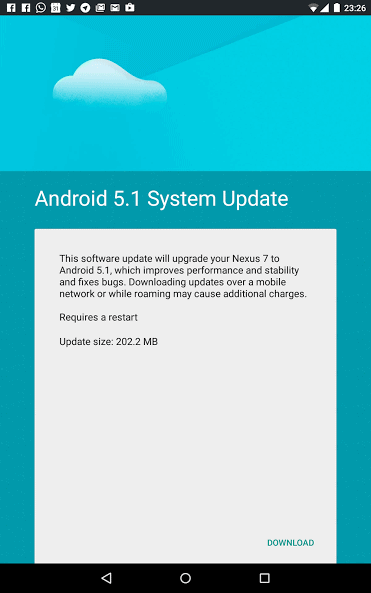