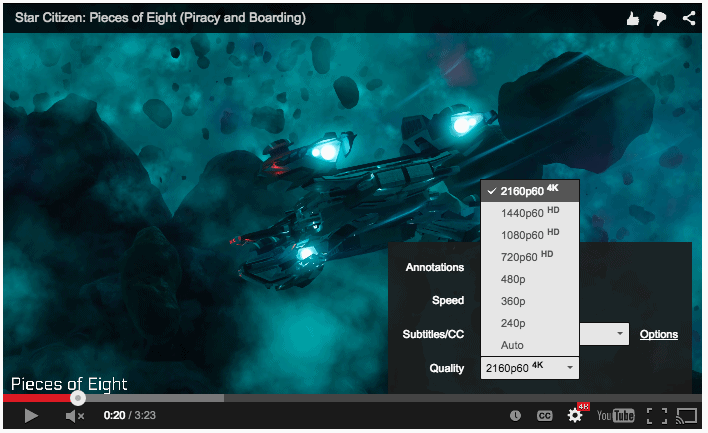 We always want more pixels, videos just look so much better with more pixels. But what about smoother videos? Like 60 FPS smooth? Well YouTube already allows 60 FPS playback on the site, but not for all resolutions. However, now YouTube is experimenting with 60FPS Video on YouTube at 4K resolution. Which means ultra high-definition video that's ultra-smooth. The video geeks are going to love this! Currently, it's just an experiment, obviously. And it's limited to a very small batch of clips. That's not an issue as a lot of videos on YouTube aren't in 4K, heck most are barely even 1080p. They are closer to 720p. Nevermind the framerate at of what they are shot at. Additionally, cameras that shoot 4K/60FPS are pretty expensive, but not impossible to find. However they are far from the standard right now.

There are some examples down below of YouTube videos shot at 4K and 60 FPS. They look really good. Of course, your computer may not be able to handle them, and if you don't have a 4K monitor, you're likely watching in 1080p. Your internet also needs to be able to handle it. As we all know about YouTube's buffering, this will probably only add to the problem, at least until Google Fiber gets rolled out all around the country. As 4K uses larger files, which means it'll need faster internet speeds to get the video playing without buffering. On a 100+ mbps connection, you should be fine though. But that also depends on how stable that connection is.

If your computer can't handle the videos at 4K and 60FPS, don't be mad, as most computers probably won't be able to handle it. It does take quite the toll on the processor to play these videos they were meant to be played in. But it is great to see YouTube working on the quality of videos posted on YouTube. Although there are still quite a few 360p videos out there, however, quite a few of those don't look bad at all. And others are likely from years ago, when 720p and 1080p weren't the norm.