Xiaomi keeps on releasing devices. This company has already released a couple of new smartphones and various smart gadgets in January this year. They have also unveiled some devices in India since then, and have revealed the special bamboo version of the Mi Note device. The company is expected to unveil the Redmi Note 2 and Mi 5 in the coming weeks / months, and it seems like they’re preparing to launch something else in the near future, at least according to the newest GFXBench listing. Let’s see what’s this about.

A mysterious Xiaomi device popped up at GFXBench, and is codenamed “Ferrari”. This is not only interesting because of its codename, but also because of the specifications that its carrying. This thing is featuring a 4.9-inch 1080p (1920 x 1080) panel along with 2GB of RAM and 16GB of built-in storage. Qualcomm’s 64-bit Snapdragon 615 octa-core processor powers on this handset along with an Adreno 405 GPU for graphics. 13-megapixel camera is located on the back of this thing, and a 5-megapixel snapper is available up front. The listing also says that Android 5.0.2 Lollipop comes pre-installed here, with Xiaomi’s proprietary MIUI OS of course.

Now, looking at the specs, this seems like a mid-range handset. The thing is, this doesn’t belong in any of the currently available Xiaomi lineups. The screen on this handset is too small to be the Redmi Note 2, and it can’t be the Xiaomi Mi 5 because the specifications are not exactly high-end. It is possible that this will be the 2GB version of the Mi 4 that we talked about recently, though the Snapdragon 615 processor doesn’t really fit the bill here. Previous report said that the 2GB version of Xiaomi’s 2014 flagship will be powered by the Snapdragon 801, not the Snapdragon 615 chip. You can check out the listing yourself in an image down below, or you can follow the provided source link which will take you directly to GFXBench listing. We expect to see more information regarding this handset soon, so stay tuned, we’ll report back as soon as we get some additional info. 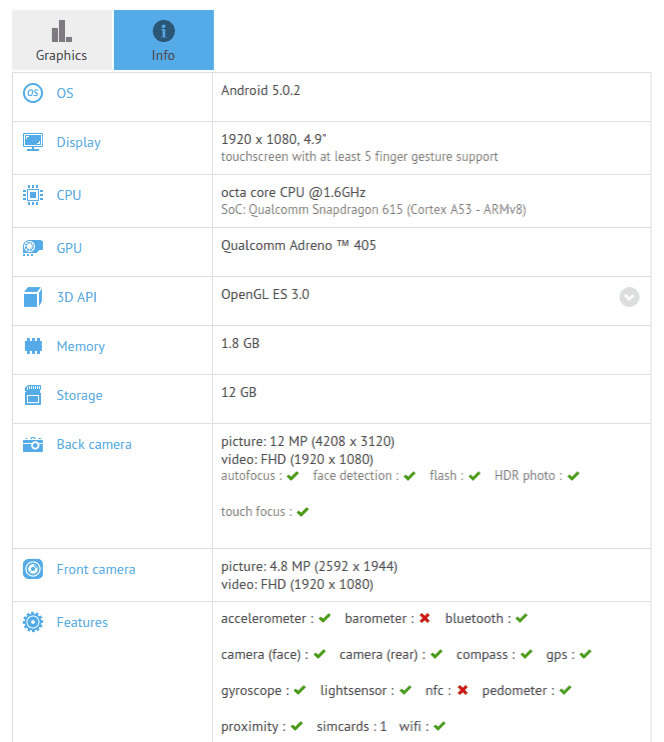