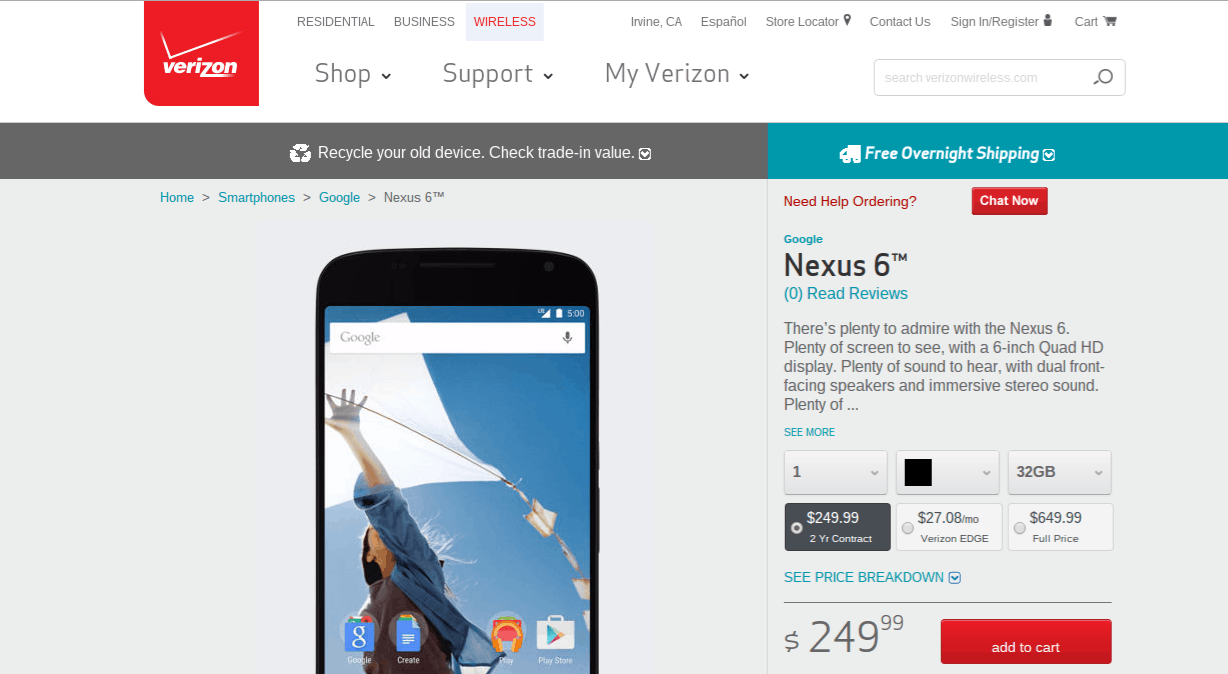 It might have taken its time in happening, but it looks like the wait is finally over. If you have been waiting for the Nexus 6 to land with Verizon, then wait no more. Over the last week, it had been rumored that today, March 12th would be the day that Verizon was going to launch (at least online) the Nexus 6 and that seems to be exactly what has happened today. The Verizon Nexus 6 page is live and you can now order your very own Verizon branded device.

Well, to be clear, you can only now pre-order the device as it is won't begin shipping until next week, but that said, it is still a major step in the right direction. You can order now, pay now and rest assured that the device will begin to make its way to you in a few days time. If you are thinking about picking up one then here are the details. On a straight two-year contract the device will set you back a cool $249.99 down payment. If you prefer to take advantage of Verizon Edge payment program, then you can forego the bigger upfront payment and instead simply pay $27.08 per month over the two years. Lastly, if you just want a Verizon branded Nexus 6 paid in full then you are looking at $649.99. Other than that, the device is only available in black (which is a little surprising as usually only available in midnight blue and cloud white) and only available in a 32GB variant. Although, you can pick up six months free Google Play Music when you buy the Nexus before March 31st.

It is expected that there is no major difference spec-wise from the Verizon model to that of the standard unlocked and with that in mind, the Google Nexus 6 will include a 5.9-inch QHD AMOLED display with a 1440 x 2560 resolution (493 ppi). Inside, the Nexus 6 will come with 3GB RAM and powered by a Qualcomm Snapdragon 805 quad-core processor (clocking at 2.7GHz). Additional features worth noting include, 32GB internal storage, 13MP rear shooter, 2MP front facing option, 3220 mAh battery and of course running on android 5.0 (Lollipop). So, will you be picking up a Verizon branded Nexus 6 now that it is available? If so, hit the source link below.