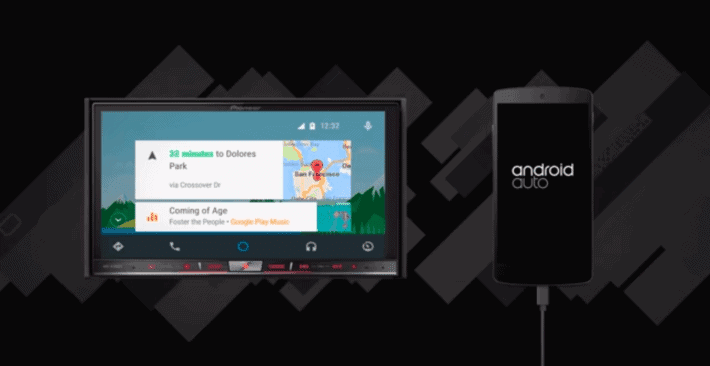 Since Google announced Android Auto back at Google I/O last summer, many of us have been salivating to get our hands on Android Auto in our own cars. We've seen some aftermarket products from Pioneer, Kenwood and others. That you can install into your car instead of having to buy a new car that supports Android Auto. We saw some of these back at CES in January. Now it appears that Pioneer is beginning to ship their first Android Auto device. It's the AVH-4100NEX, and it'll cost around $700.

This head unit from Pioneer supports both Android Auto and CarPlay. So if you have both devices, or maybe your wife has an iPhone, then you're all set. It's available now from Amazon, Best Buy and other places. For those that haven't seen any hands on with Android Auto (do you live under a rock?), basically you plug in your Android 5.x smartphone into your car. And then your phone is controlling the UI, while you interact with the 7-inch touchscreen in your car. The UI is the same for every product, which is very simple to use, and basically like having Google Now in your car. It also works the same if you have an iPhone, and the CarPlay UI looks more like iOS, obviously.

With Android Auto, you have your phone, Google Maps, Google Music (other music services are available too like iHeart Radio, Spotify, and others). So you are able to navigate to where you're going as well as listen to music and even answer phone calls using your cars' speaker system. It's a really great experience. I got to experience it at the North American International Auto Show in January on the latest Hyundai Sonata, and it just worked so seamlessly.

While Pioneer is the first to ship, they aren't the only ones. We are also waiting on Panasonic, JVC Kenwood and others as well. Which we should start seeing shipping in the next few weeks, if everything goes well. The 4100 model here from Pioneer is actually their cheaper model. The 7100 is $1200 and the 8100 is $1400.