Hoverdroid 3D is a game from the same developer of Helidroid 3 and once again, it's a game that tries to capture the fun of having a remote control vehicle to play around with as you see fit. This time around, you're in charge of a Hovercraft that can traverse concrete, grass and of course water. There are 24 missions with a variety of different tasks, like navigating cones, and even using deployable wings to hover in mid-air. With a fully 3D world to explore and a particle engine to show off dirt and water, this is a fun game that can deliver the feeling of exploring your backyard with an RC Hovercraft but on your Android smartphone or tablet. Read on as we take a closer look.

As with other games on Android, all you need to do is to download Hoverdroid 3D from the Play Store and then open it up. 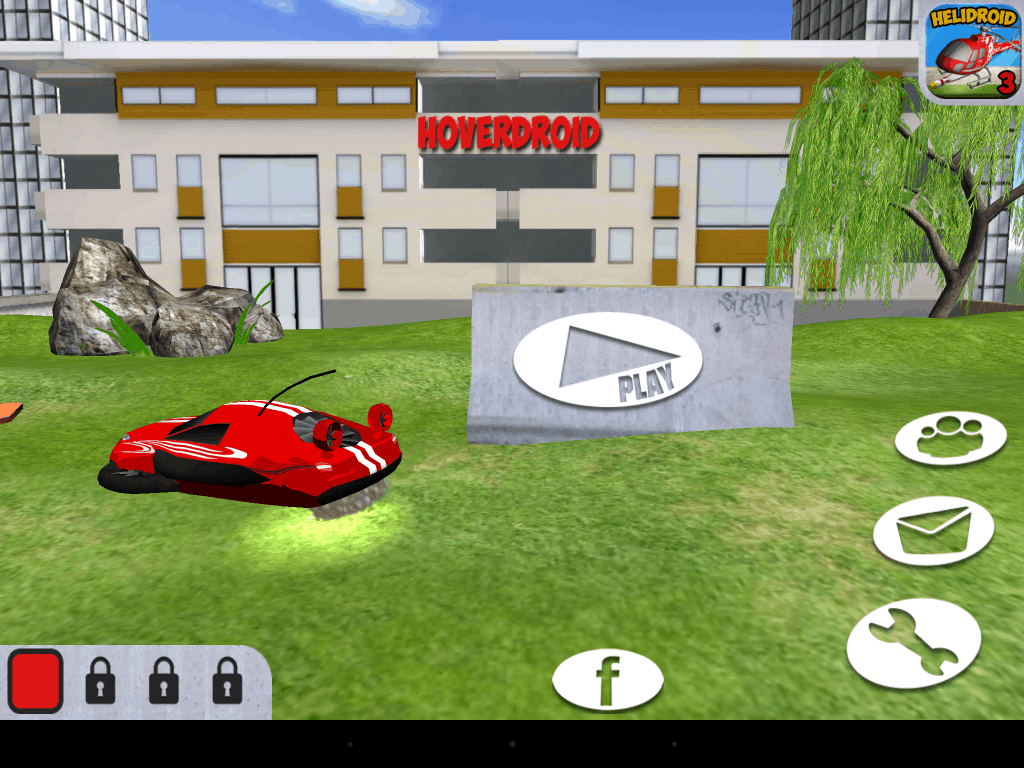 As we said above, there are 24 missions here, and you unlock new missions by completing earlier ones, you do not have to do them in order if you don't want however, starting with the tutorial is a good idea. 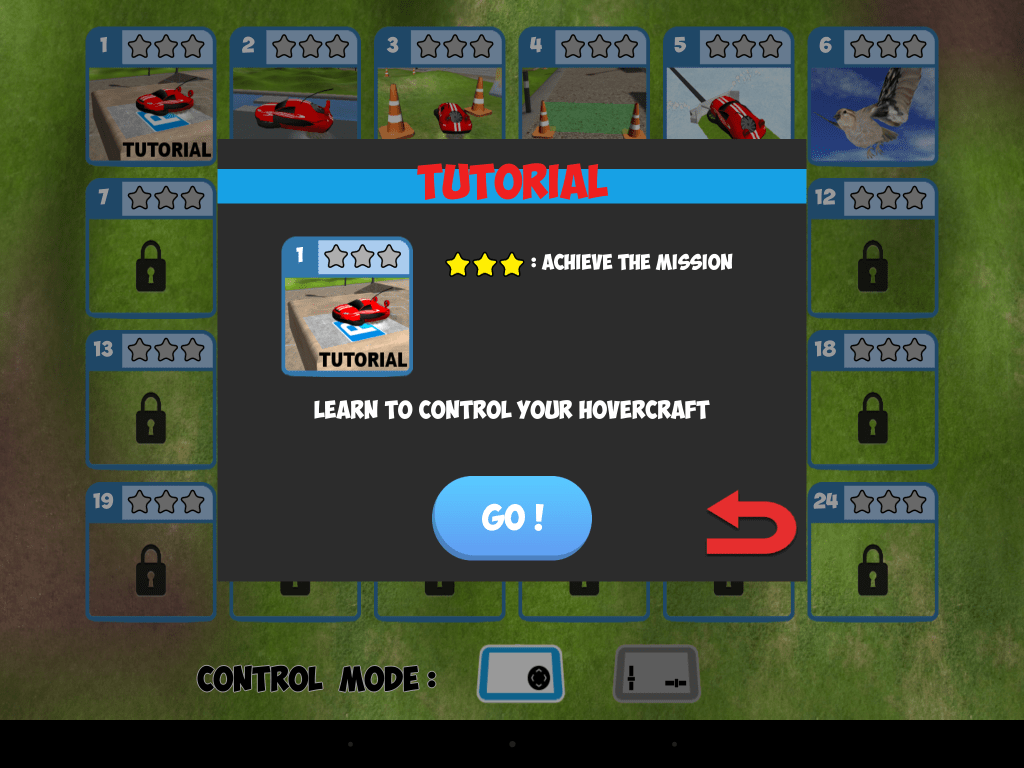 When you start a mission there's a sort of overhead look at your objectives which give the game a nice feel and they can help you find your way as well. 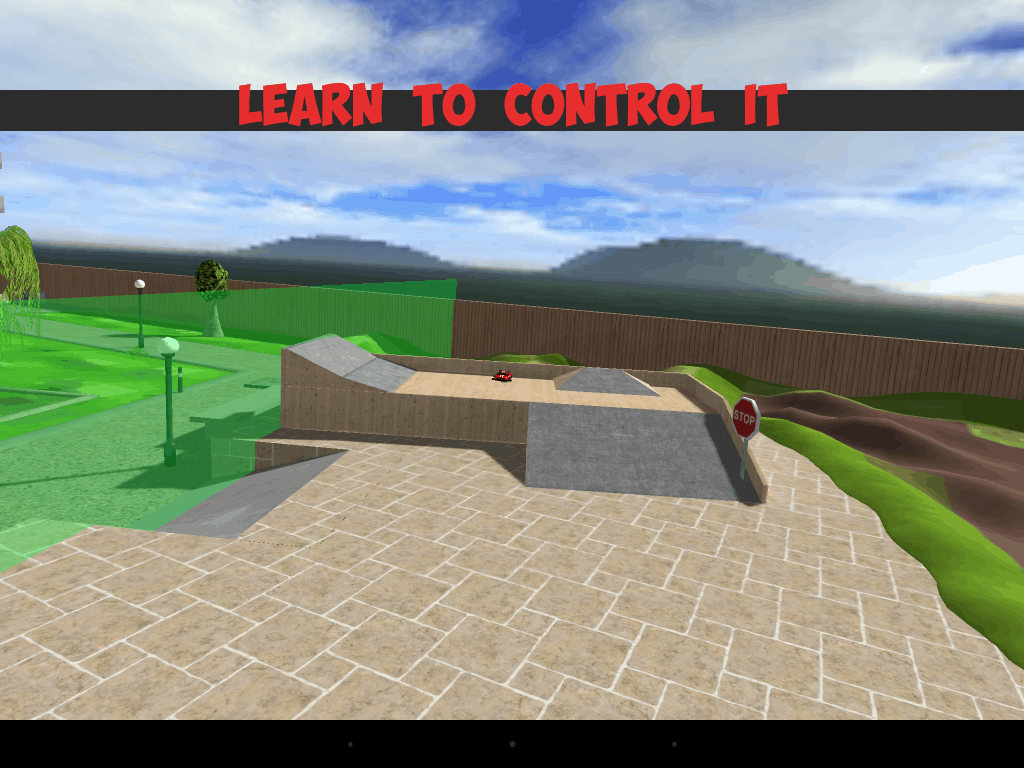 A nice feature of Hoverdroid 3D is that the missions are never the same. One mission for instance, is all about exploring the garden. 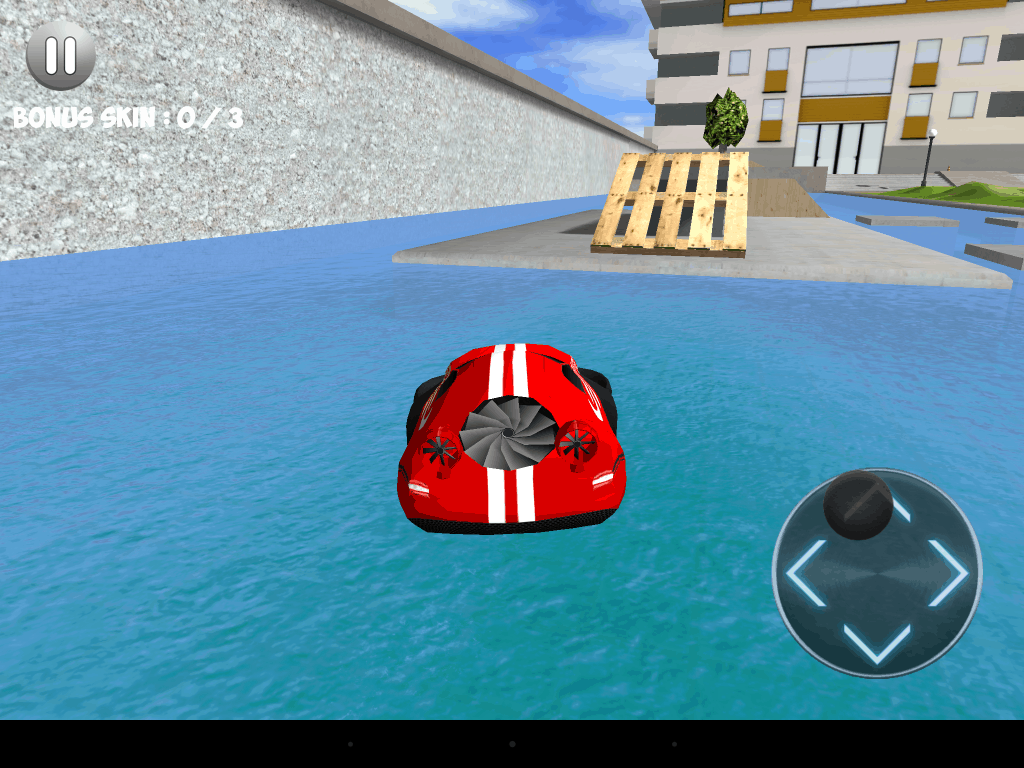 Another mission tasks you with passing through cones as quickly as possible without touching them: 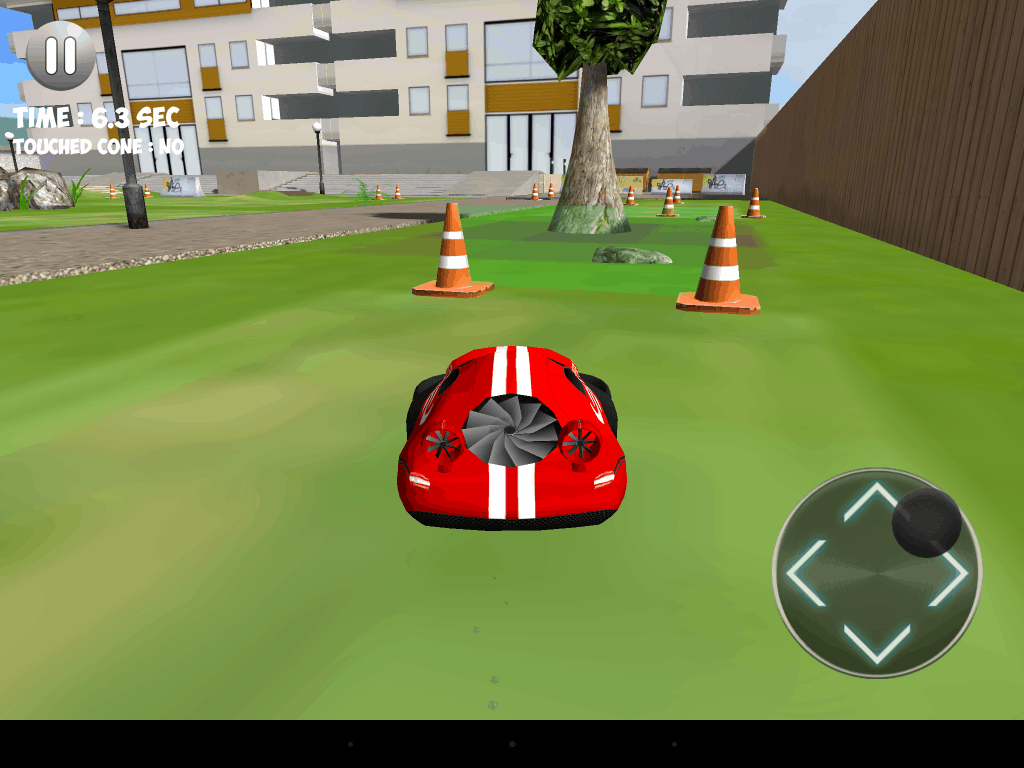 One of my favorite missions was learning how to use the wings, with an even more fun mission involving birds to come later. 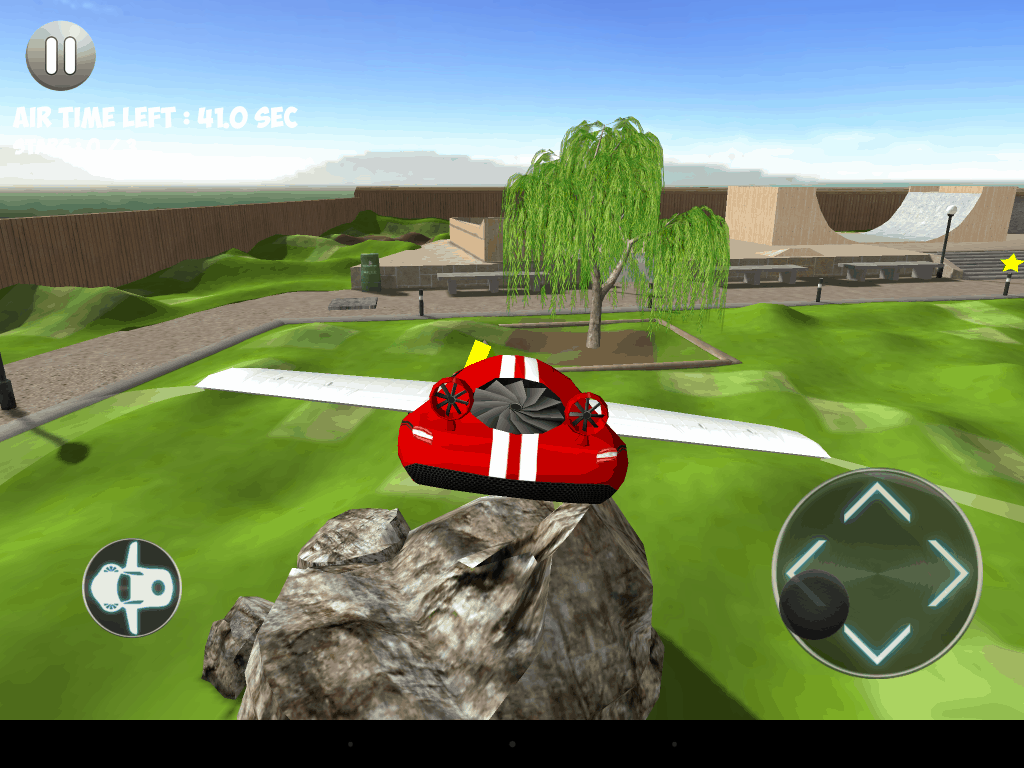 At the end of each level, you're given a rating out of three stars, with these targets explained to you before you actually start each mission. 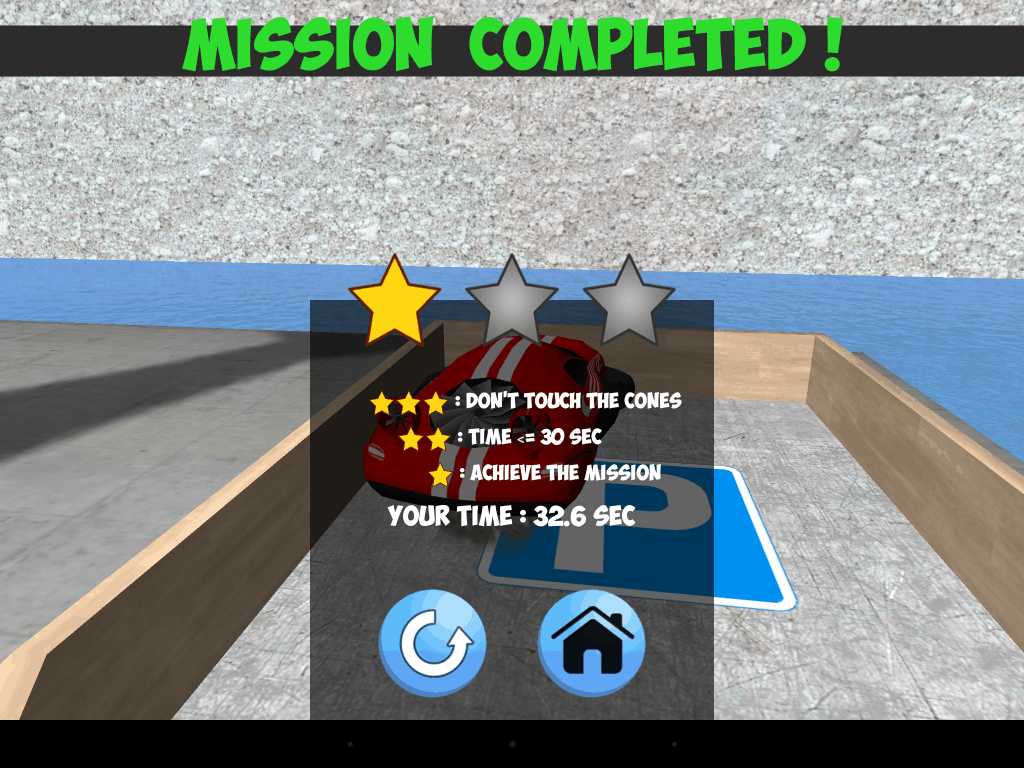 Variety is something that really shines in Hoverdroid 3D, with missions giving you snow plows and more later on. 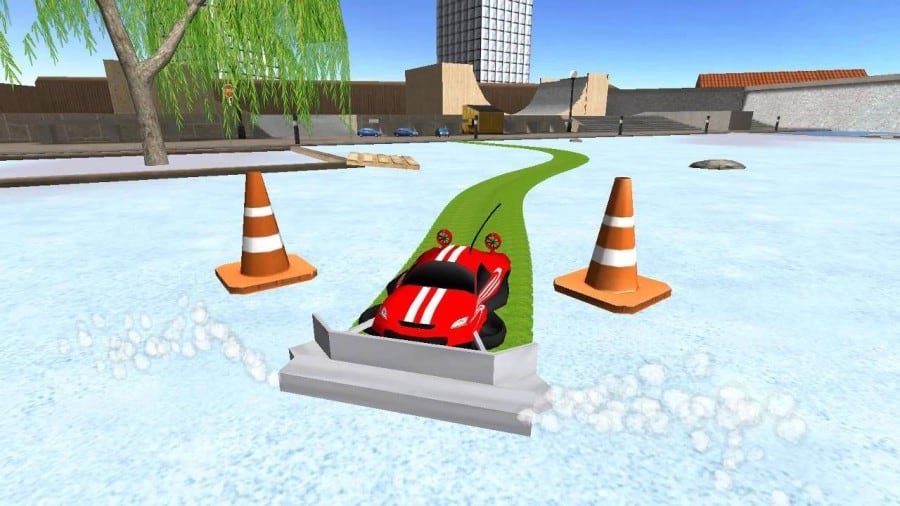 You're also able to collect different skins for your RC Hovercraft, too. 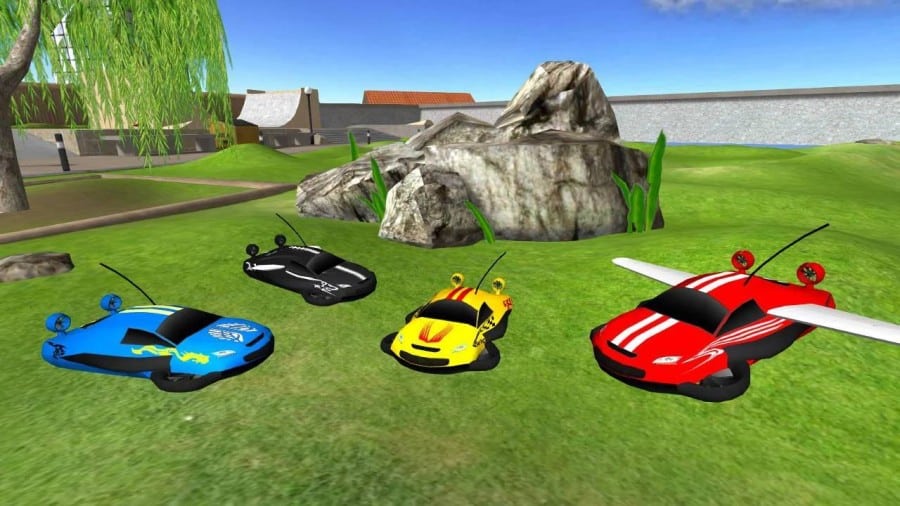 There's a lot on over in Hoverdroid 3D, not just the fact that you have quite a bit of freedom to explore the areas how you see fit, but also because the missions are so varied. You're given the chance to test out your speed, learn how to fly, collect different objects and more. It's a great way of utilizing the 3D environment, but using both the ground, the air and even the water a little bit. These tasks might not be in-depth or anything, but it's certainly nice to get to try everything out, and just have fun with it. I enjoyed the controls as well, the joystick is pretty easy to master, and the little RC vehicle really does act like a Hovercraft would do. With lots of variety and a great sense of freedom, there's a lot to love about Hoverdroid 3D and I'm sure many users will come to love it.

After spending some time with Hoverdroid 3D, I can say that this is a game those of all ages will really enjoy. There's no need to fork out any extra cash here either, as everything extra is unlocked throughout playing. Ads are thoughtfully worked into the game as well, so as not to put players off. For a game that's free, has a lot of variety and gives players a lot of freedom, there's little reason not to at least give this a try.